Kiki & Mel discuss their friendship and some “too real” moments in Die Real Housewives van Pretoria. 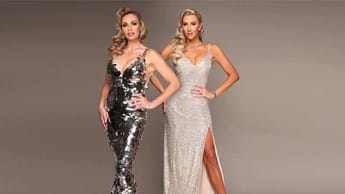 Die Real Housewives van Pretoria on kykNET (DStv Channel 144) has stomped its stiletto heel into the nation’s hearts. With its meltdowns and in-your-face attitudes, the posse of Pretoria’s poshest neighbourhood serves drama.

Watch Die Real Housewives van Pretoria Season 1 Thursdays at 20:00 on kykNET (DStv Channel 144) and on Catch Up until July 2023.

Kiki and Mel’s friendship started on the show when they realised that they have plenty in common. “I’m crazy about Mel, I adore her,” says Kiki. “Mel is really such a softie and such a humble person, but the situation she was in [at the start of the series] made people see a different side of her,” adds Kiki.

Mel chimes in that she and Kiki see eye-to-eye because they are more playful than proper. “Some people think everything is so serious, but we laugh at each other and Kiki’s a great woman. She is so sweet and she gets along with everyone. She’ll also tell me upfront any time I post an unflattering photo – and she’ll be right! I’ll always listen to her wise advice,” says Mel.

As viewers saw at the start of November, this loving friendship has a competitive edge. Mel surprised her team when she pulled off a speedy manoeuvre to beat Kiki across the finish line in a car race. As The Real Housewives of Pretoria unfolds, there will be plenty of drama to come with Kiki’s continued house hunt and Mel’s upcoming Diamond Nail Day in episode 6, on 17 November. Look out for episode 7 on 24 November, where Mel and Kiki get ringside seats to a celebrity boxing event, and there’s something that leads Mel to question Kiki’s true intentions.

kykNET (DStv Channel 144) is available exclusively on DStv Premium and Compact Plus. To upgrade your existing package,click here. Or if you'd like to Get DStv, find a service that suits your needshere.