What to Watch on BoxOffice | November Highlights | DStv

Thor, three wishes, and a UFO that eats people this November on DStv BoxOffice. 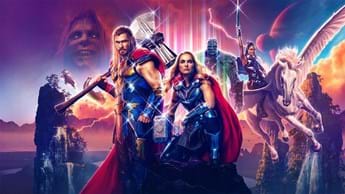 There’s something for everyone this November with DStv BoxOffice. If you’re looking for a period drama, Mr. Malcolm List takes you to 9th-century England. Meanwhile, Tilda Swinton and Idris Elba’s romantic drama film, Three Thousand Years Of Longing, has a touch of strangeness.

Read on for this month’s highlights and make every night a Movie Night with DStv BoxOffice. November has a story to tell...

The one to book

Just when you thought it was safe to go back to the movies, writer/director Jordan Peele leaps out with a new science-fiction Western horror film. Siblings OJ (Daniel Kaluuya) and Em (Keke Palmer) inherit their father’s movie-horse training ranch after his mysterious death. They’re on the brink of having to sell the farm to traumatised former child actor Jupe (Steven Yeun) when they decide to capture and sell footage of a supernatural entity for profit.

On Box Office from Monday, 7 November

In this Regency era romantic comedy in the Bridgerton mould, Selina Dalton (Frieda Pinto) agrees to help her rich London-based friend Julia Thistlewaite (Zawe Ashton) to take revenge on the rich and influential Mr Malcolm (Sope Dirisu). Mr Malcolm humiliated Julia in public when he rejected her as wife material based on his exacting and preposterous list of desired qualities in a future Mrs Malcolm.

On Box Office from Monday, 14 November

Alithea Binnie (Tilda Swinton) accidentally released a Djinn (Idris Elba) from a bottle that she bought in the Istanbul bazaar. But to the djinn’s surprise, she seems reluctant to take advantage of the three wishes he’s offering her. When she accuses him of being a trickster, her tells her three tales of past people he’d served: The Queen of Sheba (Aamito Lagum), Gülten (Ece Yüksel), a concubine in the court of King Suleiman The Magnificent, and Zefir (Burcu Gölgedar) the wife of a Turkish merchant. Directed by George Miller (Mad Max: Fury Road) and based on AS Byatt's short story The Djinn in the Nightingale's Eye.

On Box Office from Friday, 18 November

While fleeing the Bennet plantation where she’s been enslaved in rural Georgia, Alice (Keke Palmer) breaks out of the vast woods to find herself on a highway – because it’s not the 1800s, it’s 1973! A truck driver named Frank (Common) brings Alice up to speed on American history, the civil rights movement and her legal rights. After reading up on the death of the plantation system, and seeing Pam Grier in the 1973 movie Coffy, Alice decides to return to take revenge on cosplaying slave owner Paul Bennet (Johnny Lee Miller).

On Box Office from Friday, 18 November

James (Paul du Toit), an out of work actor desperate to keep his family off the street, lands a last-chance gig working at a drag club. While it’s going to be a hard sell to his wife Susan when she finds out what he’s up to, James finds working in drag unexpectedly liberating…until one of his new colleagues dies under mysterious circumstances. With Wessel Pretorius as Mrs. Balls, Jacques Bessenger as Jay-C Le Roux, and Herman Lensing as Kiwi Polish.

On Box Office from Tuesday, 22 November

Also coming to BoxOffice this November

Sport 05 December 2022
The road to the quarter-finals

DStv Catch Up lets you say “no stress” because whatever the day has in store, you’ll be able to see your shows whenever you’re ready

DStv invites you to dinner whipped up by some of TV most exquisite chefs.