Get in the front seat of the taxi industry 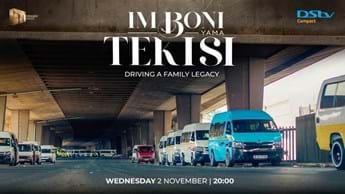 The taxi world is a multi-billion-rand industry and one of the most dangerous fields to work in, but it’s also shrouded in secrecy. This November, Mzansi Magic’s (DStv Channel 161) reality show, Imboni Yama Tekisi lifts the curtain on the lives of taxi bosses.

The series premieres on Wednesday 2 November at 20:00, and it stars four taxi bosses, who give unprecedented access into their lives and what it takes to thrive in this industry.

At the heart of the show is Nthabiseng Keroan. She is a widowed taxi boss and entrepreneur. The larger-than-life personality took over her family business, following her husband’s death. Her journey hasn’t been easy though. Not only because the taxi industry is male dominated but she wasn’t involved in the business while her husband was alive, so she had to learn the ins and out of the field from scratch after his death.

Then, there are the Biyela twin brothers, Lindokuhle and Zakhele, who have more than 20 children between them, and they are navigating several co-parenting relationships. Having fled Empangeni, we will follow them as they handle their taxi business despite the absence of their third business partner, their brother.

Finally, we meet Sabelo Ndaba, who has survived multiple attempts on his life, one of which left him in a wheelchair. He is a farm owner with dozens of cows, the Mpumalanga-based boss is also juggling his polygamous lifestyle, while trying to deal with the mother of his child, who is limiting access to the little one.

Set in KwaZulu-Natal, Gauteng, and Mpumalanga, Imboni Yama Tekisi gives viewers a front row seat into the lives of some of the bosses, who run the taxi industry in South Africa. The show will explore how they conduct business, their family dynamics and how they stay safe while running their empires.

“Our reality slate at Mzansi Magic is unmatched, and we’re pleased to expand the different worlds we give our viewers. The taxi industry is a key component of South African life, yet beyond the headlines, very little is known about some of the people who run it. It’s exciting to give our viewers a reality show that intimately documents those in the industry,” says Shirley Adonisi, Director of Local Entertainment Channels at M-Net. “Over the past year, we’ve grown our content slate and branched out even further when it comes to reality TV. It’s a genre that resonates with our viewers and pulls in impressive numbers. We are confident that Imboni Yama Tekisi will become another audience favourite,” she concludes.