What to Watch on DStv Family in November 2022 | Highlights

Inside X-Repo, a Gordon Ramsay showdown, braai rivals and more this November with DStv Family. 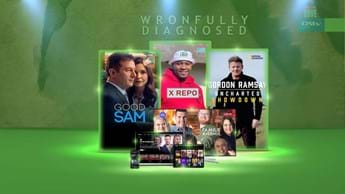 You’re invited to the DStv Family reunion this November!

We have cookouts with Kom Ons Braai: Familie En Vriende, the gossip on bickering dads and daughters on Gordon Ramsay Uncharted Showdown, and on medical drama series Good Sam. We even get to hear shocking stories about people’s hospital visits gone wrong in Wrongfully Diagnosed. If anyone’s nicked granny’s spoons, watch out, because we’ll take them back! Xolani Maphanga is just a phone call away, and he’s on a mission X Repo.

PS: Because you get to see so much more on DStv Family, check out our other monthly highlights packages for news about November’s hit series like, Tyler Perry’s The Oval, brand-new reality series Bad Hair Day, and Pop Goes The Vet With Dr. Joya.

Even in the hands of world class healthcare professionals, treatment can go wrong despite everyone’s best efforts. No medical procedure is without risk. However, what if you didn’t get anyone’s best efforts? What if your concerns about pain, infection, or your symptoms were dismissed or ignored? In a hospital, overcrowding, overwork, negligence, misconduct and malpractice can lead to tragedy. This reality series will show how South Africans who’re suffering lifelong consequences from those mistakes and malice can seek financial compensation, and what it takes to make a civil case.

Imagine having the most demanding dad on Earth as your boss. That’s Dr Sam Griffith’s (Sophia Bush) dilemma on this medical drama series. She is appointed Chief of Surgery after her father, Griff (Jason Isaacs), falls into a coma. When he awakes, he is determined to trip Sam up so he can reclaim his old job. What a pill! There’s more drama in store for Sam too, since her BFF Lex (Skye P. Marshall) has been having an affair with Griff. PS: Look out for the One Tree Hill reunion when Sophia’s former co-stars Hilarie Burton and Bethany Joy Lenz guest star as a patient and her sister.

Xolani Maphanga was a bouncer on Uyajola 99 before landing his very own reality series, so whatever the crowd throws at him, he’s ready. This season, he’s back to help people settle a personal beef. He assists family members, friends, ex-lovers, and even small businesses get their belongings back. From cars and cows, to furniture and sentimental items, as long as you have the receipts, Xolani and his security guards will take it back for you. Look out for that new timeslot!

Prepare for three episodes and three extreme cooking challenges as Gordon takes on his former apprentices, Paul Ainsworth and Matt Waldron, as well as his daughter Tilly. On England’s Jurassic Coast, Gordon and Paul dive for seaweed and lobsters, and while in Wales, Matt and Gordon fish from a tiny boat. We visit a Welsh Cheese Mine, and finally, in Costa Rica, Tilly learns all about the local cuisine before a tropical cook-off with Dad.

South Africa’s favourite special experiment returns as three pairs of braai buddies, who’ve never crossed paths before, either wind up snapping their tongs at each other or phone numbers in each episode. It’s an opportunity to go all-out – from decor to the menu, to the braai setup, because there are points at stake from the other two teams. In episode two, we’ll see the braai masters get down on the ground, and in episode 5, Kom Ons Braai goes all-out with a Survivor-themed episode, complete with obstacle course. PS: Make a note of those real crowd-pleasing recipes, because December holidays are around the corner.

Also on Family this November

Firecrackers this November on DStv Premium, Compact Plus and Compact

Check out the other highlights packages for more on these shows, which you will also be able to watch this November