Tune into the series and movies on Universal+

What you need to know about Universal+

With Universal+, you can watch box sets of your favourite series and movies from one convenient place. 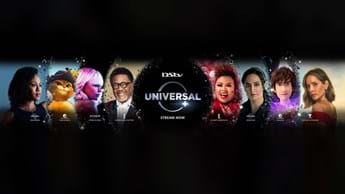 When Universal+ launches on Friday, 14 October, DStv subscribers can watch a selection of full box sets all in one and easy-to-access place.

By visiting DStv Catch Up on the DStv App or the connected Explora decoder, and selecting Universal+, you’ll be able to stream compelling content from all these channels. You can also binge-watch all seasons of your favourite series such as SAFTA-winning game show, Celebrity Game Night, as well as hit reality show, Keeping Up with the Kardashians and drama series, Family Drama.

What’s more is that Universal+ will be constantly refreshed with new content, bringing you over a thousand hours of your favourite shows and movies. You can also watch brand-new seasons of medical telenovela, Nurses, and drama shows: Private Eyes, Departure, and Diggstown. If you’re wondering why, you can’t see some of the programmes on Universal+, that’s because the content is available for the channel brands that are included on your DStv package.

Get set for dramas that will leave you intrigued, to the very best reality series, must-watch movies and so much more.

Read below to see some of the shows and movies coming to Universal+...

Welcome to Celebrity Game Night at Anele Mdoda’s house! The TV and radio personality invites two teams of South Africa’s hottest celebs to compete in a series of challenges that range from pop-culture quizzes to games that test nerves of steel!

Botched change lives and restore hope through remarkable and transformational surgeries. Renowned plastic surgeons and hosts, Dr. Terry Dubrow and Dr. Paul Nassif, put their surgical skills and expertise to the test as they set out to correct damage done from plastic surgeries gone awry. They attempt to fix the unfixable and correct extreme, head-turning plastic surgery nightmares.

An aviation investigator teams up with an ex-cop to look into the disappearance of a plane and while they are able to find a single survivor, questions remain.

The telenovela follows María Clara’s love story. A failed marriage, a divorce, raising her two children, and falling in love again with a younger man. Not to mention her vital work.

The Scent of Passion Season 1

The Scent of Passion is an adaptation of the 1995 Colombian drama and follows the story of two lovers who belong to different worlds. A coffee farmer who, whilst retrieving a hectare of land gifted to her, meets the son of the late owner of the farmland. In the process, an irrepressible attraction is born between them.

Dragons: Race to the Edge

Unlock the secrets of the mysterious Dragon Eye and come face-to-face with more dragons than anyone has ever imagined in Dragons: Race to the Edge. The movie is from DreamWorks Animation, creator of the blockbuster How to Train Your Dragon films. Hiccup and Toothless lead the Dragon Riders soar beyond the borders of Berk and discover the mysterious Dragon Eye, which is filled with ancient secrets that lead them to new lands filled with undiscovered dragons. Soon after, the heroes find themselves pursued by marauding dragon hunters who will stop at nothing to seize the power of the Dragon Eye!

The world’s favourite feline hero and milk connoisseur dons his signature footwear and springs to action when he accidentally breaks the magical spell that protects the hidden city of San Lorenzo. Puss is forced to do more than become a local hero as he protects the now-defenceless, wildly eclectic townspeople from all manner of villains — he must become a legend. Nothing can stand in the way of this swashbuckling daredevil ... except a hairball!

Card Link
Back to News
International 21 October 2022
All rise

Famous faces from across Africa attended the Universal+ launch, hosted by Anele Mdoda.

With Universal+, you can watch box sets of your favourite series and movies from one convenient place.

Card Link
International 01 September 2022
Get on the plus side

Prepare to stream captivating local and international content on Universal+