Watch Naked And Afraid, Alone, and Bear Grylls on DStv 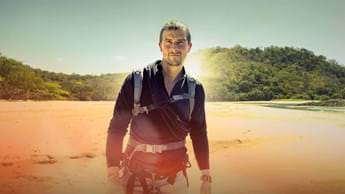 Are you suffering from Survivor South Africa withdrawal? Winter 2022 was tough, but those Castaways were tougher. Now that our local struggle buddies are gone, it’s time to make new friends in three tales of extreme survival in the frozen North. They’re tackling the biting cold, snow, scant vegetation and dangerous wild animals to show that humans can survive anything life throws at us.

Naked And Afraid XL: Frozen Season 8 strips its twelve contestants stark naked. The dozen are ditched in the Rocky Mountains in early spring, while there’s still snow on the ground. A primitive survival kit is tossed at them, and they are left to figure out how to cope for 14 days.

Contestant Joe Ortlipp reveals, “We still had to follow state fish and game laws. We quite literally could have been in the middle of a herd of dancing deer and ducks and wouldn’t be allowed to draw on them [with a bow and arrow].” Fellow contestant Jeremy McCaa broke those rules and paid! “I had wildlife and fisheries show up while filming and read me my rights. Issued 5 citations and a year of probation,” he admits. “They took the SD card out of the camera that caught the kill to have evidence. I knew I was illegal but I was hungry.”

Bear Grylls is taking celebs into the wilderness in Running Wild With Bear Grylls: The Challenge Season 1. In episode two, Bear takes actor Simu Liu (Jung Kim in comedy series Kim’s Convenience), into the Canadian Rocky Mountains. Bear makes Simu strip down to his skivvies and hack a hole in the ice so they can go for a dip together. Later, Simu has to defrost a frozen maggot with his tongue so Bear can hook up the wiggling thing to attract fish. “It’s really cold for a while, and you think it’s just like a little piece of ice, and then it just starts squirming around,” says Simu, who might be scarred for life.

In Alone: Polar Bear Island Season 9, six returning contestants are each dropped off alone around Big River in Nunatsiavut, in Canada’s Labrador province. While the show hypes those bears, the weather is the real killer, and a huge storm will test everyone’s shelter construction skills.

Well, step aside. The ultimate stone-cold survivor is (now 96-year-old) Sir David Attenborough, who embarked on a seven-year international globetrotting wildlife quest in his mid-eighties. You can see what he got up to in Attenborough’s Global Adventure.

Watch Attenborough’s Global Adventure Season 1, Sundays at 16:30 on BBC Earth (DStv Channel 184) and on Catch Up until Sunday, 9 October.

Equipped with just 10 items of their choosing, previous Alone competitors Greg Ovens, Woniya Thibeault, Callie Russell, Mark D'Ambrosio, Amós Rodriguez and Michelle Finn must survive in total isolation. Anyone still standing after 50 days will share the prize. PS: The season was filmed during a time of year when there are no polar bears in Labrador.

Twelve of Naked And Afraid’s ultimate champion competitors are dropped off in the high Rocky Mountains in Montana, with no shoes, food nor water. All they have is a special kit containing primitive tools and bare minimum raw materials needed to survive in the frozen tundra.

In this six-episode season, Bear teaches celebs survival skills, then takes them into the wild to test that knowledge. Natalie Portman gets the Escalante Desert, Simu Liu is in the Canadian Rockies, and Ashton Kutcher is in Costa Rica’s coastal jungle.