Succession, The White Lotus and Euphoria win big at the 2022 Primetime Emmy Awards. 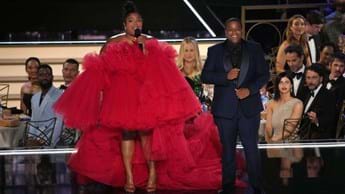 Hosted by comedian, Kenan Thompson, the 2022 Primetime Emmy Awards honoured the best TV shows and performances from the past year. In his hilarious and memorable opening act, Kenan paid tribute to iconic shows such as Friends, Game of Thrones and Law & Order SVU.

It was a night of firsts as Squid Game became the first non-English language Emmy winner, Zendaya made history as the youngest two-time winner, and Lizzo won her first Emmy for her reality show Watch Out for the Big Grrrls.

Taking home the big awards was Succession, which won Best Drama Series, as well as Best Supporting Actor for Matthew Macfadyen. Euphoria won six trophies, including Best Actress in a Drama Series for Zendaya, and The White Lotus won five awards, with cast members Murray Bartlett and Jennifer Coolidge winning Best Supporting Actress and Actor in a Limited Series. What a night!

DStv customers can add Showmax to their bills and enjoy some of the Emmy-winning shows such as The White Lotus, Euphoria and Succession.

Ted Lasso
Abbott Elementary
Barry
Curb Your Enthusiasm
Hacks
The Marvelous Mrs. Maisel
Only Murders in the Building
What We Do in the Shadows

Outstanding Lead Actor in a Limited Series or TV movie:

Outstanding Lead Actress in a Limited Series or TV movie:

Outstanding Supporting Actor in a Limited Series or TV movie:

Outstanding Supporting Actress in a Limited Series or TV movie:

Lizzo’s Watch Out for the Big Grrrls
The Amazing Race
Nailed It!
Rupaul’s Drag Race
Top Chef
The Voice