Local TV shows to watch on weekends on DStv 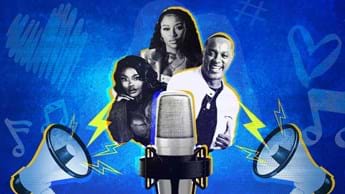 Weekends are for relaxing, recharging and catching up on your favourite TV shows. If you’re not sure what to watch, DStv has you covered with a weekend line-up that will keep you on the edge of your seat.

Kick things off with drama series Ayeye: Stripped, which gives viewers a glimpse into an adult content creator’s complicated life. It’s followed by DJ Zinhle’s reality series The Unexpected and soccer on Saturdays, which makes for a viewing party with friends. To wrap up the weekend, there’s cooking show 7 Colours to inspire your Sunday family lunch, and the explosive Uyajola 9/9 sees distressed lovers confront their cheating partners.

There’s something for everyone, just sit back and enjoy the best entertainment.

So, you won’t be home this weekend but still want to tune in? Don’t miss the action! With the DStv App you can watch DStv whenever and wherever you want.

Rosemary Zimu’s character Zoleka thought she’d hit the jackpot with her wealthy sugar daddy Mguyo (played by Sipho Mbele), but the stay-at-home mom’s life is turned upside down after he dies. And just like that, she loses everything. Mguyo’s wife Nosmilo (Zama Ngcobo) kicks Zoleka out of “her” husband’s mansion. With no job and a mouth to feed, Zoleka becomes an adult content creator. Before she knows it, she goes down a dark and dangerous path.

Watch Ayeye: Stripped Season 2 Fridays at 20:00 on Mzansi Magic (DStv Channel 161) and on Catch Up

Based on true events, the show features people who’ve had a brush with the supernatural. Be it a zombie or creature that was conjured unknowingly or sent by someone close to them, the participants share their near-death experiences. Prepare to get spooked by the re-enactments.

Clear your schedules for the Premier League this weekend as Arsenal meets Fulham. The Gunners will be looking to continue their unbeaten start to the season while Fulham undoubtedly challenge them in every aspect.

The X-Repo team helps people get their belongings back – only if they have proof that they are the rightful owners. Whether it’s a dispute between friends, ex-lovers, or family members, X-Repo will ensure that justice is served.

Ntombezinhle Jiyane, who’s better known by her stage name DJ Zinhle is doing it all: She is an entrepreneur, a DJ, a mother to her two daughters, and most recently, a wife to musician Bongani “Murdah Bongz” Mohosana. Besides opening her accessory store in Season 2 of The Unexpected, she travels the world, gets married to Murdah Bongz in a traditional ceremony, she grows her empire – and she is taking viewers for the ride.

Sunday lunch isn’t complete without seven colours on the plate – the uniquely South African colourful Sunday cooking trope, which sets the premise for the cooking competition. The show follows boisterous and quick-witted co-hosts Lillian Dube and Moshe Ndiki as they visit two teams who cook their best Sunday meal, and the winners receive a cash prize. While the teams reveal their competitive streak and cooking skills, the co-hosts offer their critique and hilarious comments.

Join host Molemo “Jub Jub” Maarohanye and the Uyajola 9/9 team as they assist upset lovers, who confront their cheating partners. Jub Jub and the team leave no stone unturned in exposing the cheaters, and they travel to all corners of the country – from Johannesburg to Duban – they also chase the cheaters in shopping malls and taxi ranks, all in the name of catching the cheaters and holding them accountable for their actions.

To upgrade your existing package, click here. Or if you’d like to Get DStv, find a service that suits your needs here.