The one who knocks 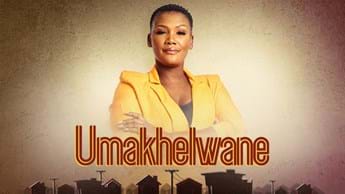 Soso Rungqu laughs as she tells us about the toughest audition of her career. “The starting point was me having a meeting with the executive producer and they said, ‘This is the idea for the show. It's going to be challenging. It's really demanding because we're dealing with different people, different communities all over the country. Basically… you're solving problems.’” That was an understatement. The show was uMakhelwane, and the problems Soso would have to solve involved sometimes bitter and violent conflicts between neighbours.

“I was told I would need to audition for the pilot. And it was a different kind of audition – you don’t do it in front of the camera with another guy reading (the other role) for you. It's a reality show, so how they normally audition is they put you out there in the street and give you an episode to do and see how you are going to do that," Soso’s face shows clear astonishment as she speaks. “It had a camera crew, it had everybody there. I had a sound check, I had makeup and wardrobe. I did everything! It turned out so great that they even used it as an episode,” she adds, proudly. “I was extremely nervous. I was a wreck! But I pulled it off.”

As it turns out, that trial by fire was 100% necessary, because uMakhelwane would go on to present unimaginable challenges. Soso had to be tough.

Soso to the rescue

You were walking into volatile situations. What kind of security did you have?

“I had bouncers! They walked around with me. They normally have two, one for myself and the director and producer and driver, and then the crew also has security with them. They're guys that walk around with you and make sure that everything runs as smoothly as possible and that we don’t get attacked, because situations do get quite intense. It does get hectic, it does get physical.”

Which episode really tested you?

“We were shooting an episode, I think, in Soweto. When the researcher told me the story, it seemed like there was this boy who bothered the community and the neighbours because he walks around naked and he attacks people and apparently he's not mentally stable. So we went to the house… (Soso pauses to gather herself) and I have never seen conditions like that in my whole, entire life. When I walked into the house, I thought, "This is no place for a human being to live!" There was an older brother who could barely walk or speak. The mother, yoh, the mother... It was bad. This woman has dementia, she's seeing things. There's broken stuff in the house, the walls had turned – they had moulded. So this boy is not around, and just when we're about to leave, he comes in. I broke down whilst we were shooting. I was just like, "It's too much!" and after that I was supposed to shoot another episode, a different episode, and I was an emotional wreck already. I've never been so emotionally drained in my life. But luckily the (Moja Love) CEO saw that episode and there's hope for that family now. It's a really emotional show, but it helps that they do offer intervention. There have been some good situations and bad situations, and there have been some situations where we say, "I don't know what is going to happen if this person doesn't want to get help!"

“I grew up in East London, born and bred in a township called Amalinda. It was always neighbourly. My sisters and I played with the neighbours' children. My parents never taught me prejudice; they taught me that just because today you are doing well, it does not mean you will always do well. So when you speak to someone, speak to them in a manner that is kind. Then we left the township in 1994, I was probably about 10, to move into the suburbs. It was a challenge at first because we were the only black people on that street. It was culture shock, for them, as much as it was for me. I was used to the townships and knowing everyone, but in the suburbs, people stay in their own homes, so you only see them when they open the door or drive out. There were problems and glitches here and there, but my mother knew how to stand up for herself, and as time went, everything smoothed itself out. It's about the treatment that you give people. What you give is what you get.”

What makes a good neighbour?

“A good neighbour is someone who is respectful. We greet each other, we talk, we say hi. I know I can come to you if I have a problem. When you have a braai I don’t make an issue out of it just because people are parking next to my house. Those nice little things. And being a bad neighbour is being a bully, thinking that you're living on your own, forgetting that there are other people who don’t think like you, don’t do the things that you do, and don’t believe in the same religion that you do.”

Where do you stand on minding your business vs intervening when there’s domestic violence?

“That is tricky. Last year I was in a situation like that where someone was getting abused by a boyfriend or whatever he was. There was a fight, but when I got involved, everything turned on me. (Both of them shouting) “It's not your business! It's not your problem!” But at the same time, what if something happened to this person? And that was not the only incident. There was a guy who would come here so many times to visit and he would get this girl out and she would be scared, trembling, and we wanted to call the cops, but she didn’t want to get the guy arrested. So now to the guy it seems like, “Ja, it doesn't matter what you do anyway.” But you could hear in the house, glasses are breaking. A lot of people intervened and I remember at some point the neighbours were flocking here in broad daylight. So when do you get in between them and when do you not? The best you can do is try.”

Moja Love (DStv Channel 157) is available exclusively on DStv Premium, Compact Plus, Compact and Family. To upgrade your existing package, click here. Or if you'd like to Get DStv, find a service that suits your needs here.