Rejection, deception and jealousy will not deter 3 ingénue heroines from fighting for love in 3 brand-new telenovelas coming to DStv in March 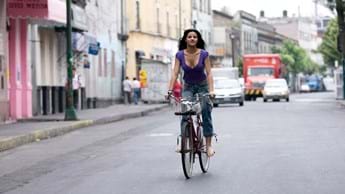 Things have kicked off a little shakily this year with all of us still living with the realities of a pandemic that, like some telenovelas, has decided to be renewed for a second season. Joh, talk about drama!

Now it’s time for something new. We have 3 brand-new telenovelas hitting tlNovelas (DStv channel 133) in March that will spice up your TV viewing.

Three beautiful ingénues from 3 brand-spanking-new telenovelas are ready and available for you to give you hearts in your eyes. Here’s why you’re going to fall in love with them…

Don’t Mess With An Angel S1

Marichuy (Maite Perroni) grew up as a humble orphan after her mother, Cecilia (Helena Rojo), who was afraid she would die, gave her to a priest who then abandoned her at an orphanage. At the age of 14, Marichuy ran away from the orphanage, only to be raped by a drunken stranger.

Wandering the streets and stealing to survive, she is taken in by Candelaria (Evita Munoz) who gets her settled at a tenement. Everybody in the tenement loves Marichuy and she’s happy telling stories to the children who live there – until she gets news that the children at the orphanage where she grew up are out of milk and starving. She then steals milk to relieve their hunger.

Caught by the authorities, Marichuy has a chance encounter with psychiatrist Juan Miguel (William Levy) who takes an interest in her and changes her life forever. But a terrible secret from their past looms over them.

Why the heroine? Marichuy is clever and feisty despite all the horrible things that have happened to her. Her sense for justice is heightened, and that is why she will even steal to feed the hungry. She is a true diamond in the rough – which the hunky Juan Miquel sees. Because of the potential she has within her, we give Marichuy our heroine a stamp of approval.

The beautiful Fiorella Bianchi (Livia Brito) comes from a disadvantaged background, but that doesn’t stop her from daydreaming about a fairytale wedding with a man she once saw on the street. Nevertheless, she must carry responsibility for her family as she takes on the role of mother to her younger sister, Gianna (Ela Velden), who suffers from a heart disease, and care for her father, Mario (Ricardo Blume), who is sick with pneumonia.

Fiorella’s world comes tumbling down when she gets fired from her job and finds her father dead at home. Mario, who knew his time was up, asked an old friend of his, 60-year-old Vittorio Dragone (Enrique Rocha) who lives in Mexico, to help his daughters in his absence. Vittorio agrees to help but deceives Fiorella by pretending that he is younger than he really is and offers to marry her. Fiorella has no choice but to accept, but her and Gianna’s journey take on a different turn when they arrive in Mexico.

Why the heroine? Fiorella is the poster child for selflessness as she puts the needs of her sister above her own. She knows nothing about Vittorio, but agrees to start a life with him so she can care for her sister, and in our books that makes her a true heroine.

The Color of Passion S1

It’s a complicated family drama in The Color of Passion with the happily married couple, Adriana and Alonso Gaxiola (Ariadne Días and René Strickler), whose lives are torn apart by jealousy and tragedy.

Rebeca (Claudia Ramírez), Adriana’s sister, has envied Adriana’s social position and marriage to Alonso for years. So when Adriana is cut out of the picture by falling down a flight of stairs, Rebeca becomes the new Mrs Gaxiola, looking after Lucia (Esmerelda Pimentel), Adriana and Alonso’s newborn.

Years later, Rebeca and Alonso’s marriage is on the rocks and Rebeca has numerous affairs until her most recent lover, Federico (Alfonso Dosal), commits suicide because of her cruelty. Marcelo (Erick Elias), Federico’s brother, sets out to get to the bottom of his brother’s death and encounters the now-grown Lucia and falls head over heels in love with her.

Why the heroine? In this instance, we give the heroine crown to Lucia. She is raised by her nasty aunt and despite being put down for most of her life, she still has dreams and ambitions. Her love for Marcelo has a slow start, but with time it grows into something special. Together she and Marcelo will hopefully expose Rebeca for who she really is.

New to Catch Up this month

DStv’s Catch Up service offers you TV in your own time, and there’s so much more to see on all packages this month.