For sale: unique property, great exposure! Contact DStv for a viewing this June. 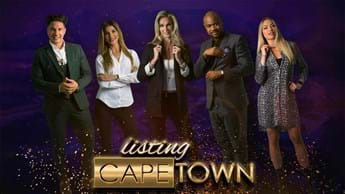 “Agents have a reputation for being sneaky and we have a stigma. But I watched Listing Jozi, and people really got to see how hard we actually have to work to make our money. I remember thinking this would work really well in Cape Town,” says estate agent Farrah Mia. So, when Listing Cape Town series producers Nico Nel and Trevor Kaplan reached out to her, she pounced on the offer. Sold!

Farrah’s not afraid of the spin and glitz of reality TV treatment – she’s binge watched Netflix real estate reality series Selling Sunset. And if she had to compare herself to one of their agents, it would be Chrishell (Stause) “Maybe sometimes she's a bit too kind. It was a nice reminder, watching her, that you need to have a little bit more of a backbone in this industry,” says Farrah.

How much of a backbone? This is an agent who flew from Cape Town to Joburg at her own expense to make sure someone signed the deal instead of sitting on their hands!

Read on for how she got her clients to be on TV, and more insider secrets from Listing Cape Town…

You've been in front of the camera as an actress and a model. How did this differ?

It was definitely different from doing a TV commercial or modelling job. It’s my actual job. When the cameras go off, I still have to do this job. And it’s more of an insight into my actual life than presenting gave. It's real.

How did that realness feel in terms of your professional reputation, because you didn’t have control over the final edit?

I thought about it before I started filming. I thought, ‘How am I going to control this?’ Or ‘How am I going to come across?” “What are people going to say?” Then about three days before filming, I said to myself, “I'm going to completely relinquish control – because I don't have any – and I'm just going to go and try to be as organic as possible.” Once I relinquished control, I was much more comfortable.

What's one of the most important discussions you had with Listing Cape Town’s producers, Nico and Trevor?

Interestingly enough, it was more about the discussions that we didn't have. We all understood that once the cameras went on, we were just going to be authentic. We didn't discuss angles, we didn't really discuss much, actually. We just put the cameras on.

How did shooting the diary session work?

They sit you down and they ask you a couple of questions. But Trevor and Nico mainly let us do all the talking. And I do talk quite a lot, so I’ll be interested to see what they’ve edited out and what they haven’t. It's just like sitting with your friends, chatting and giving people more of an idea of how you were feeling during that time or explaining the context of things more. There's only so much you can do once everything's being shot. I can't unsay anything.

Tell us a little about your diary wardrobe choices?

They had completely different wardrobes (from the rest of the episode), so there was a lot of planning and a lot of maintenance. I selected my diary outfits based on what would look nice in a shorter frame rather than full-length. And with our diary outfits, we were able to be a bit more ourselves, because I'm not the most modestly dressed and I own that! It's 2022, women can dress how they want to and still be respected and still be professional and still be good at their jobs. I wanted to wear what makes me feel good. If people think I’m dressing immodestly, that's actually something that's their problem. And most of the time I was filming the diaries barefoot, you just can’t see.

How involved were you in persuading your clients to be filmed for the show?

On the Atlantic seaboard, a lot of our high-net-worth clients really value their privacy. It was incredibly tricky getting people to agree. I said, “Put this on TV and somebody might buy it!” (Farrah laughs). I said, “You don’t know who’s watching! I've spoken to some of the customers that were on Listing Jozi, and they said for quite a lot of the properties they put up, they got new inquiries and sales from them being on the show.” I said, “You know, this is just another form of marketing that no other agent can provide right now. It's worth a shot if you're serious about selling your house.”

What was making sellers flat out refuse to appear on the show?

SARS (The South African Revenue Service)! Just kidding. I think people like their privacy. They don't want to be on TV. They don't want people to know how much money they have because that’s private. They also don’t want to let people into their house because it’s their sanctuary.

What’s one of the wildest things that you’ve done in the name of selling a property?

If you're a good agent, you basically become your client’s PA. Maybe the wildest thing I've done is fly in between Cape Town and Joburg, just to make sure that I have signatures on paper. At my own expense! That just shows if you want the deal done, you have to make sure it gets done. Because people are quite easy and quite lax. And ironically, it’s usually the people with the higher end properties that take their sweet time.

What's in and what's out when it comes to staging a property in Cape Town?

People are leaning towards the minimalistic. They want modern. They want a neutral tone. People want to move in and make it their own. They don't want to see someone else's imprint on it. Even if the house isn't new, they want to feel like no one else has ever lived in it.

What does your dream house look like at the moment?

At the moment, it’s just me so it wouldn't have to be terribly big, but double-volume homes are exquisite. It's really nice to have floor to ceiling windows and lots of natural light.

And what did 10-year-old Farrah think was a dream house?

It was probably one of those giant homes you could see on Wynberg hill or Kirstenbosch or Newlands. Something that looked palatial. But 31-year-old me sees that it's actually about the lockup-and-go security and views and that type of thing.

Watch Listing Cape Town Season 1 from Wednesday, 1 June at 20:00 on BBC Lifestyle (DStv Channel 174) and on Catch Up