5 reasons to watch TV’s funniest comedy series, A Black Lady Sketch Show (as if you weren’t going to already!) 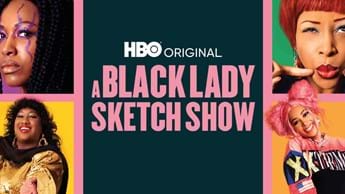 A Black Lady Sketch Show is, hands down, hands up, now hands down again – we’re doing the wave here – the best sketch comedy series on TV. Series creator Robin Thede (who worked with Insecure creator Issa Rae to bring us this show) and her girl gang including Ashley Nicole Black, Skye Townsend, and Gabrielle Dennis, are back with a new season that promises to show us everything from the truth about the apocalypse, to unwritten conversations women had in the Bible, to ashy catastrophes and deals with the devil. It’s everything from off the wall, to the kind of truths that make us feel seen. Not convinced? Let us count down just 5 reasons to watch.

A Black Lady Sketch Show doesn’t just have brilliant one-off stories. It has recurring characters like the Invisible Spy (Ashley Nicole Black) who can go anywhere because people just ignore her, and beloved recurring sketches like Black Lady Courtroom or Bad Bitch Support Group. And this season we can expect the continuation of last season’s mysterious, long-running post apocalyptic storyline. In episode 1 this season we find out that it's all been a lie because a mysterious organisation has had our ladies inside a simulation. Colour us nerdy, but intrigued. “I’m excited for the audiences to go back and track where that all came from,” says Robin, whose parents named her after comedian Robin Williams. “I tell people all the time: look at coffee cups, look at posters on the wall, look at small things on bookshelves. You’ll start to see that the world is all being connected this whole time.”

PS: DStv Premium customers get Showmax for zero extra cost, and DStv Compact and Compact Plus subscribers pay only R49 per month. All you have to do is visit www.showmax.com, select ‘DStv customer’ and follow the steps.

This season boasts over 40 brilliant guest stars, including a who’s who of modern TV show excellence like Queen Sugar creator Ava DuVernay. The success of the series means that even the little roles are attracting some pretty big names. You could have knocked us over with the flap of a daishiki in episode 1 when the fine Michael Ealy, best known as smooth talking TV producer Justin Talbot in drama series Being Mary Jane, romances Dr. Haddassah Olayinka Ali-Youngman (Pre-PHD), A Black Lady Sketch Show’s white power conspiracy theorist. It’s all intense, longing gazes and people calling each other “My high Queen” and “My most respected and chiselled King”.

Whether we’re back in the 1960s watching a rival team to the Hidden Figures ladies try to come up with a mathematical formula to send a man through time by slapping him into next week, or we’re watching puppets dressed as miniature versions of the characters, complete with mini-fashions, the show’s hair and wardrobe department is doing The Most. They play with the specific language of wardrobe within TV shows – like a Real Housewives look, a Rich B*itch drama series look, a historical drama look, spy chic or even classic sitcom styling – but bring the wink and nudge of comic exaggeration to the outfits, hair and makeup. It’s time to applaud Costume Designer Ceci, Head Makeup Artists Stacye Branche and Terrell Mullin, Head Hair Stylist Shavonne Brown, and their teams.

A Black Lady Sketch Show is silly about life in a smart way, and really brings imagination out to play. What other sketch comedy series would think of bringing you a wrestling tournament between personifications of those who send weepy, over-long, multi-chain texts, the psychopaths who reply with just “k”, the 2am booty call, and that person (you know the one) who keeps you hanging for hours with those 3 dots that indicate they’re typing? There’s a cooking competition show where the end product is “excuses”, and just wait till you see what happens in the house of a woman who regards her inspirational quote placards as actual, enforceable commandments. Let’s just say that by Wine O’Clock, it’s a Get Out situation!

Black & proud – for everyone

“We know that calling something ‘A Black Lady Sketch Show,’ it’s got to feel authentic to Black ladies,” says Robin Thede. The series gives a voice to a group who are as funny as they are under-represented in the field of comedy, and shows us the world through their eyes. It delivers loads of surprises, which makes the show feel fresh and unexpected to people who’re non-Black or non-Ladies, while also thrilling fellow black ladies with funny twists on instantly recognisable and relatable characters and scenarios to make us feel seen. Whether it’s the way people act up and act out at a funeral, the way non-athletic schoolgirls moan about athletics, or a special weather forecast focussed on hair care tips for types 4A, B and C, A Black Lady Sketch Shows turns real-life experience into comedy, or goes right off the edge into crazy town. Either way, we’re here for it.

Get the DStv App, a free service for DStv customers. With the DStv App, the same channels you watch on your decoder at home are available for you to stream online at https://now.dstv.com/, or using the DStv App on your phone.

1Magic (DStv Channel 103) is available exclusively on DStv Premium and DStv Compact Plus. To upgrade your existing package, click here. Or if you'd like to Get DStv, find a service that suits your needs here.