Fuzz takes us for a drive with Car S.O.S

Buckle up as Fuzz Townshend talks about the best-ever build in Car S.O.S and why a Rolls Royce would make a great electric car 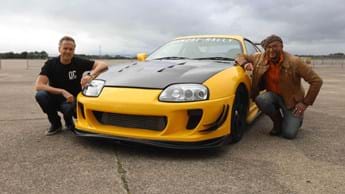 Restoration series Car S.O.S is a petrol head’s dream. The series’ presenters – motoring journalist and engineer Tim Shaw and master mechanic and musician Fuzz Townshend – are the kind of mates you’d dream of having as your garage BFFs. And they’re here to help fellow car enthusiasts with projects they’ve lost hope on. ‘It's a show about people that involves cars, rather than a show about cars that involves people,” says Fuzz. “We get to put a few more people's dreams back on track because we're dealing with situations where life has gotten in the way, and that can happen to anybody at any time.”

Read on as Fuzz chats about why a classic Rolls Royce would be even better as an electric car, which car he’d like to be buried in, and more.

Fuzz to the rescue

What’s your ideal car of the future now, compared to your fantasy future car at age 10?

When I was about 10, I was drawing cars that were based on the maximum amount of people you could get into a space. Renault got it in production before me, so I never got to be the inventor of the Renault Espace. Now when I think about the car of the future, it has no steering wheel. It has no driver. It is completely autonomous. And it is not owned by an individual, it is owned by either a collective or even a city. The greatest thing about that will be that it will take the idiots out of the equation – the bit that makes the most mistakes on the road.

The car that came along with that story was an MGB GT. And I would say that some classics would benefit from being converted to electric. Rolls Royce always tried to make their cars as quiet and as smooth as possible. So, what better than to put in an electric motor? That would achieve that early Rolls Royce ethos and probably be a lot less expensive than repairing a 90-year-old engine that has thousands and thousands of individual parts. I recognise that if this (article) goes out, somebody is going to be absolutely gnashing their teeth, but it's true. Rolls Royce would have put electric motors into their cars, if they could have done so reliably 90 years ago.

This season, what's one of the rebuilds that you're most chuffed about?

The Vauxhall Cavalier Turbo 4x4. The owner had had an awful accident on his motorcycle and ended up being tetraplegic, unable to move anything beneath the jawline. He can operate a wheelchair using his chin, but his movement is very limited now. We have a pal named Ric Wood up near Manchester who has a workshop. On the ground floor looks ordinary, but upstairs, he's got millions and millions of pounds worth of machinery – five-axis milling machines, scanning and printing…just everything you could need to make a car fit its purpose better – and in this case, to get a guy who has not been in his car for 13 years, back into his car. To do that we had to cut the post out between the doors, and we had to hinge the rear door from the C-Post. It had to hinge outwards – what used to be called suicide doors, because if you opened them when the car was going, it just pulled you out of the car! Basically, the car (now) opens like a barn door. That gave an aperture big enough to allow the chap in. We had to make it so that the wheelchair base could swing out, and then a special wheelchair that was developed for him could be wheeled up to the car and locked into this base plate. So, he was then able to transfer from the base of the wheelchair, to the out-swung base of the seat, which then could be swung back in, and there he was, locked in place in his car for the first time in ages! That involved strengthening that whole aperture where the post in the middle had been removed. It involved some high-quality T-45 tubing being bent and put into the sills to hold it in place and make the structure really rigid. Suddenly the car became something that he could get into. It meant that with a friend driving it, he was going to be able to go out and go to (motoring) shows and have something of his own to be there with and to talk about. He was no longer a spectator. That was probably the best thing we've done ever.

As hard as car restoration is, do you wish you could restore people instead?

It would be much better for us to send some sort of nanobots in to fix people, and go, “Here you are, you're sorted. Your car is still a rusting heap on the driveway, but it doesn't matter, at least you've got a chance of doing it yourself.” We just step in and do the thing that they were going to do for themselves but didn't get the chance to. Would we rather be able to literally repair people? Yeah, the answer has to be yes.

Fuzz, which car would you like to be buried in?

I'd like to be buried in an ex-Warsaw Corporation Daimler Fleetline CIG Six L-W (a double decker bus), with the Northern Counties Motor Engineers' H-4129-D Body, converted by Lex Garages of Stourbridge to Dual-Door in 1971 to 72. However, I know that's not going to happen because none of those particular buses exist (anymore). So, if it has to be a car, just fold me up and shove me in a Mini. Leave some space for some others!

National Geographic (DStv Channel 181) is available on DStv Premium, Compact Plus, Compact and Family. To upgrade your existing package, click here. Or if you'd like to Get DStv, find a service that suits your needs here.