Adventurer Hazen Audel talks about Amazon jungle must haves – from the backpack and machete, to the camera crew 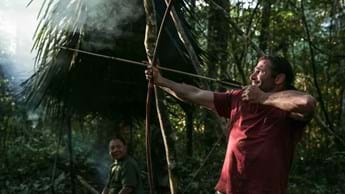 Survival expert and adventurer Hazen Audel (Primal Survivor and Survive The Tribe) is on a 60-day, 500-mile (805km) expedition on foot through the uncharted Amazon jungle to reach the plains of Guyana. Whether he’s getting stung repeatedly while sticking his hands in a beehive for a scoop of honey, carrying around rotten fish because it’s too wet to make a fire, provoking a goliath bird eating tarantula, or sucking on a tender grub for breakfast, Hazen will stop at nothing to survive, and he never loses his sense of wonder.

But he was not alone on the journey. We spoke to Hazen about what he and his crew (including Director of photography Ross Hamilton, technical assistants Tess Benjamin and Suzanne Bliss, sound recordist Adam Laister, aerial photographer Jahlani Clarence, and Director Nat Sharman) went through to make Primal Survivor: Escape The Amazon Season 1 for National Geographic (DStv Channel 181), and what they carried with them.

Escape The Amazon With Hazen Audel

We’re going to see your experience on screen, but what was it like for your sound and camera crew?

I'm glad you brought it up, because the people that I get to work with need to be celebrated. It's 1 thing for me to go through (the jungle). I might have a machete in my hand, and I’ve got a backpack, and I'm charging along. But they have a 60-pound (27kg) camera, and they're looking at the environment through a very small hole (lens), trying to keep up with me. They work all day carrying those cameras and having that responsibility to capture this adventure. And then at the end of the day, often the sun is already down when they have to make camp. They have to go set up a hammock or however they're going to be able to spend the night, they've already been muddy all day long, and there is no way for them to get clean. They sleep in mud, they sleep with muddy legs, they wake up with their feet and clothes still muddy, and then they carry on and follow me. A lot of cameras died during this expedition, but they're tough. They were the ones that were experiencing parasites with me. They themselves had all kinds of infections. They had to deal with all the bugs and bites. A lot of us got different kinds of parasites (including the dreaded botfly maggots), and we just had to deal with it. We all suffered together.

I do get pretty upset with the show being about me, when there's this incredibly dedicated team that works so hard. They get to show off to the world really what they do, and I couldn't be doing this without them. And with what I get to do, I also wouldn't make it very far if I didn't use the things that I learned from the indigenous people all along the way. So, it's a team effort. What we accomplished there in Guyana has never been done ever before, and it could have only been done by the team that we had. By the end of those months, and months, and months in the forest, we were all incredibly tight friends. We still are very much a team.

How big is the team when you're out in the field?

We have a number of cameramen. We have 2 primary camera operators that are carrying those cameras; we also have a person who’s super-dedicated to sound, so it's not a silent film. Then it takes a lot of assistance from Native people, from the locals, to give us local knowledge. They help the team with boat travel, and offer us the safest places where we can set up a camp or where they can sort out their camera equipment for the next day. They might be building shelters for the camera equipment, so it can stay out of the rain. Oftentimes you'll see this high-tech camera equipment, and it's all under thatched roofs from palm branches and stuff that had just been cut down minutes before a huge storm. A lot of the local crew and the indigenous people helped out along the way. It was this major cultural exchange in so many ways, you know. We're learning their languages, they're learning our languages…but we're all there to highlight the indigenous people's lives and the nature that we're all around, so it was gonna be awesome.

What was it like seeing the Wai-wai people make their animal calls and share their knowledge of local plants and animals?

We're all products of our environment. You could probably go to London, and somebody will go, “Yeah, that looks like a Ferrari F40. That sounds like a Bentley.” And when a helicopter goes by, there's a lot of people that know what kind of helicopter it is. That's just what their world is. That's how they communicate. We subconsciously gather everything. We're subconsciously understanding there's people around us. And that's their life, too, it's their language that they know.

What was in your backpack?

Even though it's the tropics, sometimes if it's raining torrentially, it is impossible to light a fire and the nights we'll get down to about 60 degrees Fahrenheit (15,5C). That doesn't seem that cold, but if you haven't eaten in days and it continues to rain, you can actually get hypothermia. What I do if I just am not prepared, if I can't make a fire and I can't make shelter, is I'll bring a wool shirt. I have an old-fashioned hand-me-down, salvaged wool shirt, that's with me. And then for emergencies, I have a little roll of athletic tape in case I get a huge wound or something. I'll tape my skin together and that'll get me through the day. And that's about it. The rest of the time, it could be dried meat, whatever I catch, wild medicines, or if I'm able to make a bunch of rope from the forest, I'll keep it in there.

Watch Primal Survivor: Escape The Amazon Season 1 from Wednesday, 4 May at 21:00 on National Geographic (DStv Channel 181)

National Geographic (DStv Channel 181) is available on DStv Premium, Compact Plus, Compact and Family. To upgrade your existing package, click here. Or if you'd like to Get DStv, find a service that suits your needs here.