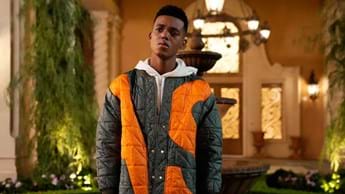 When Will Smith slapped Chris Rock at the Oscars, on the night he won his first Academy Award, as Best Actor for King Richard, people joked online that this was not the first time Smith had “got in one little fight” and that next he’d be moving in with his auntie and uncle in Bel-Air - a reference to the setup of the iconic 90s sitcom The Fresh Prince of Bel-Air. Based on Smith’s own life, this was the show that first made him a mega-star.

Bel-Air, now available to binge on Showmax, reimagines the Emmy-nominated sitcom, and Smith’s journey from the hard streets of West Philadelphia to the gated mansions of Bel-Air - ‘flipped-turned upside down’ as a drama, not a comedy.

Rotten Tomatoes listed Bel-Air among their Most Anticipated Shows of 2022, with LA Timessaying “Bel-Air brilliantly reimagines a comedy classic” and Empire Magazine hailing the series as “a bold reimagining that maintains the essence of the original show while exploring important social themes from an authentic, Black perspective.”

“When I first saw the Bel-Air trailer, I was on the floor,” says Smith, who quickly signed on as an executive producer. “Duh! For twenty years I had been trying to figure out how to make a way back into [that] world, but the idea of shifting from sitcom to drama, while still staying in the same lane of the ideas and the concept? … I was like, ‘Yo, that’s an idea that is brilliant… the dramatic version of The Fresh Prince for the next generation… Who’s this dude? This dude’s a genius. Get him here immediately.”

What followed is the stuff of a Hollywood fairytale, with a bidding war that culminated in NBCUniversal’s streaming service Peacock signing a rare two-season order off the strength of just the pitch video, in a deal that included their biggest marketing campaign ever. Cooper directs the pilot and is credited as co-creator.

For Smith, the story is still intensely personal. “We get to go back to the beginning and start talking about my real experiences. For example, for me, I moved to LA and started The Fresh Prince – and all of my friends started getting killed and going to jail. The escape that I made from it, in real life, was the escape that Will made in the show. Was I going to be that same statistic, or was I going to be something different?”

Of the original series, Smith says, “As funny as the episodes are, there was a whole other layer that you couldn’t do… What I’m most excited about, and what really clicked in my mind when I saw the trailer that Morgan did, is the concepts in The Fresh Prince of Bel-Air, reimagined as a drama. Like, a real kid, from West Philadelphia, modern-day? A Black family in Bel-Air? The Carlton character, a Black, young Republican, modern-day?... The heat that would be stirred up between these characters! Like, what’s the Hilary character in a world of Instagram and social media? Uncle Phil, a Black lawyer-turned-judge, today, with young Black kids coming before him? Aunt Viv, a professional woman who decided to raise her family and, now that her kids are older, is making her way back… what is her life going to be? All of that stuff is so rich. The dramatic version of these ideas means you can use existing storylines, but it’s not going to seem like you’re redoing an episode, because the storyline is going to be brand new from the dramatic perspective.”

While Will played the fictionalised version of himself in The Fresh Prince, newcomer Jabari Banks stepped into the lead role on Bel-Air. The all-new Banks family is completed by Cassandra Freeman (Inside Man) as Aunt Viv, Adrian Holmes (Arrow, Supernatural) as Uncle Phil, singer-songwriter Coco Jones as Hilary, Akira Akbar (Captain Marvel, Good Trouble) as Ashley, and Nigerian-American actor Olly Sholotan (Run Hide Fight) as the way-too-cool Carlton, with Jimmy Akingbola (Arrow) as Geoffrey.

“We’re really going to peel back the layers of these iconic characters and explore this world in an unforgettable way,” says Cooper. “It’s a show that’s going to surprise people in the best way possible.”