The 12 best international series to Binge on Showmax this April

The 12 best international series to Binge on Showmax

The 12 best international series on Showmax in April, from Halo to Bel-Air to Yellowjackets 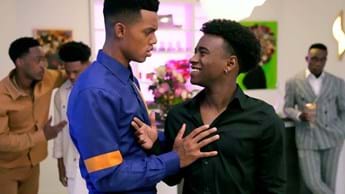 One of Rotten Tomatoes’ Most Anticipated Shows of 2022, Halo brings one of the highest-grossing gaming franchises of all time to the small screen, 21 years after the epic Xbox military science fiction game first launched.

Already renewed for a second season, Halo follows Master Chief (Pablo Schreiber from American Gods and Orange is the New Black), a cybernetically enhanced super-soldier, as he defends humanity from an alien threat known as the Covenant. MTV Movie Award nominee Natascha McElhone (Californication) is Dr. Halsey, the brilliant, conflicted and inscrutable creator of the Spartan super soldiers, and Jen Taylor reprises her voice role from the game as Cortana, the most advanced AI in human history, and potentially the key to the survival of the human race.

Executive produced by controversial 2022 Oscar winner Will Smith, the brand-new Fresh Prince-inspired series, Bel-Air, is full of surprises. It’s set in modern-day America, but it’s also a prequel to the hit ‘90s sitcom. And it’s a drama, bringing a whole new take to Will’s life-altering journey from the streets of West Philly to the gated mansions of Bel-Air.

One of Rotten Tomatoes’ Most Anticipated Shows of 2022, Bel-Air is co-created by Morgan Cooper (the fan whose viral YouTube trailer reimagining The Fresh Prince of Bel-Air as a drama inspired the whole project), Black Reel nominee Malcolm Spellman (The Falcon and the Winter Soldier, Empire), and T.J. Brady (The Chi, The 100).

Empire Magazine calls the series, “A bold reimagining that maintains the essence of the original show while exploring important social themes from an authentic, Black perspective.”

Equal parts survival epic, psychological horror story and coming-of-age drama, Yellowjackets has a 100% critics' rating on Rotten Tomatoes, where it was the fourth highest-rated drama of 2021, and became the second-most streamed series in Showtime's history (topped only by Dexter: New Blood), leading to the show’s renewal for a second season before the first had even concluded in the States.

As The Guardian says, "Yellowjackets is the most fun TV show in forever."

Ray Donovan: The Movie picks up where the seventh and final season of the Emmy-winning series left off, with Mickey (Oscar winner Jon Voight) in the wind and Ray (eight-time Emmy nominee Liev Schreiber) determined to find and stop him before he can cause any more carnage.

With multi-award-winners Eddie Marsan (Wrath of Man, 21 Grams) and Dash Mihok (Silver Linings Playbook, Romeo + Juliet), Pooch Hall (The Game), and Katharine Moennig (The L Word) co-starring, the film also weaves together the present-day fallout from the Donovan/Sullivan feud with Ray and Mickey's origin story from 30 years ago.

Prompted by fan protests at the show’s cancellation, Ray Donovan: The Movie has an 87% critics' rating on Rotten Tomatoes, with New York Magazine saying, “Ray Donovan: The Movie never feels like cheap fan service; it hints at what an entire eighth season could have been and provides just enough closure while avoiding easy conclusions for most of its characters.”

One of Rotten Tomatoes’ Most Anticipated Shows of 2022, HBO’s Somebody Somewhere centres on Sam, a 40-something woman grappling with loss and acceptance as she faces a mid-life crisis following her sister’s death. Sam returns to her hometown but struggles to fit into its mold, until she finds her saving grace in singing, and a community of outsiders who don't fit in, and don't give up.

Starring and executive produced by Bridget Everett (Lady Dynamite, Unbelievable, Inside Amy Schumer), the comedy-drama has a 100% critics' rating on Rotten Tomatoes, where the critics' consensus reads, “Led by a captivating Bridget Everett, Somebody Somewhere explores the human condition with tenderness, grace, and warmth.”

Everett’s central performance has drawn widespread critical acclaim, with The Wrapsaying, “America is about to discover what New York theatre diehards have known for years: Bridget Everett is a force - and a voice - to be reckoned with.”

HBO has already renewed Somebody Somewhere for a second season.

A collection of five films by Oscar winner Steve McQueen (12 Years A Slave), Small Axe is based on the real-life experiences of London's West Indian community between 1969 and 1982.

The anthology has won over 24 international awards, including a Critics' Choice Award for John Boyega, a BAFTA for Malachi Kirby, and a Royal Television Society Award for Shaun Parkes in 2021, with Letitia Wright and Micheal Wright also nominated for a BAFTA. The series was also nominated for an Emmy for its cinematography and won five BAFTA craft awards, with McQueen taking home the Innovative Storytelling European Film Award.

The second film, Lovers Rock, was named the best film of 2020 by Sight & Sound in its poll of over 100 critics globally. Set over a single evening at a house party in 1980s West London, Lovers Rock follows intertwined relationships against a background of violence, romance and music. The film has a 98% critics' rating on Rotten Tomatoes, where the critics' consensus calls it “a lovingly crafted ode to Black joy.”

No, it’s not a joke – or rather, not just one. It’s a whole new season of the perennially inappropriate Larry David in Curb Your Enthusiasm.

The series star and creator (and 28-time Emmy nominee) returns alongside Susie Essman, Jeff Garlin, Cheryl Hines, and J.B. Smoove, while the season’s guest line-up knocks it out of the park with stars like Lucy Liu, Woody Harrelson, Kaley Cuoco, Bill Hader, Jon Hamm, Seth Rogen, Albert Brooks and Tracey Ullman, not to mention Vince Vaughn returning as Freddy Funkhouser and Ted Danson back to annoy Larry as Cheryl’s plus-one.

Nominated for no fewer than 47 Emmys (with just two wins), Curb Your Enthusiasm is #54 on IMDb’s Top Rated TV list, with a 94% critics' rating on Rotten Tomatoes for Season 11. Giving it a 100% rating on Metacritic, The Daily Beastsays, “It’s reassuring to know that no amount of paradigm-shifting, reality-altering events can stop the fictional Larry David from being a smug, screamy, narcissistic loon, and the real Larry David from being the funniest comedian on television.”

HBO’s two-part documentary Phoenix Rising follows the true story of Emmy-nominated actress and activist Evan Rachel Wood, a survivor of domestic violence, as she moves toward naming her infamous abuser for the first time and advocates for The Phoenix Act, extending the statute of limitations in California for domestic violence felonies.

Produced and directed by Oscar-, Emmy- and BAFTA-nominated filmmaker Amy Berg (The Case Against Adnan Syed, Deliver Us from Evil), The Telegraph calls the documentary a “blazingly courageous, necessary watch.”

The documentary has a 97% critics rating on Rotten Tomatoes, where the critics' consensus says, “Evan Rachel Wood is fearless in Phoenix Rising, a harrowing exposé on abuse, tabloid complicity, and the long process of healing.”

PAINTING WITH JOHN S2 | Binge from 4 April, first on Showmax

Painting With John was Rotten Tomatoes’ 14th best new series of 2021 and their 29th best TV series of 2021 overall, with a 100% critics' rating. As the critics' consensus there says, “A celebration of art and life through the eyes of a delightful curmudgeon, Painting with John is a surprising, intimate feat of TV joy.”

Written, directed by and starring John Lurie, co-founder of musical group The Lounge Lizards, the series is part meditative tutorial, part fireside chat. Each episode has John at his work table at his home in the Caribbean, honing his watercolour techniques and sharing what he’s learned about life, reminding us to prioritise some time every day for creativity, fun and a bit of mischief.

"I was hoping this show would be educational, but I really don’t know what the f*ck I’m doing,” says John. He adds, “My hope is to make a TV show where people see it and say, ‘I have no idea what I just saw, but I couldn’t stop watching it and it was wonderful… I think I can get there in season two.”

The Playlist hailed Season 1 as “one of the smartest shows on television,” placing it seventh on their best TV shows of 2021 list, and adding, “It’s a show about painting that’s not really about painting. Lurie uses the time to ponder questions about life, music, and art. It becomes a series of deeply personal conversations with a genius as Lurie opens up about his own life, including his cancer treatment. We may have all been alone in January 2021, but John Lurie made that isolation easier to take.”

Comedy series Flatbush Misdemeanors follows Dan and Kevin, two longtime friends trying to climb out of their heads and connect with others in their brash new surroundings in Flatbush, Brooklyn.

Created by and starring Black Reel Award nominee Kevin Iso (That Damn Michael Che) and Dan Perlman, the show – which is based on their multi-award-winning 2017 digital series – has already been renewed for a second season.

Season 1 has a 100% critics rating on Rotten Tomatoes. RogerEbert.com calls it "a hilarious, unforced two-hander that feels totally fresh," while TV Guide praises “the heartfelt friendship at the core of this darkly comedic series”, calling it “one of the best shows of 2021.” Kevin

Set in a small Rust Belt town in Pennsylvania, American Rust stars Emmy winner Jeff Daniels (The Comey Rule, The Newsroom) as police chief Del Harris, who finds himself in a compromised position after the son of the woman he loves (Emmy nominee Maura Tierney from The Affair, Your Honor) is accused of murder.

Based on the LA Times Book Prize-winning novel of the same name by Pulitzer Prize finalist Philipp Meyer, American Rust was nominated for a 2022 Satellite Award for Best Drama Series.

Based on the Argentine series La Chica que Limpia, The Cleaning Lady follows a whip-smart Filipina doctor (Elodie Yung from The Hitman's Bodyguard and The Defenders), who comes to the U.S. for medical treatment to save her son. When the system fails and pushes her into hiding, she becomes a cleaning lady for the mob and starts playing the game by her own rules.

Paste compares the crime drama to Breaking Bad, saying, “The Cleaning Lady is a fast-paced portrayal of a woman pushed to the edge and forced to contend with hard decisions for the wellbeing of her family… Yung’s central performance is filled with warmth, determination, and grit.”

Winners on Showmax at the 2022 Critics' Choice Awards included:

EVERYTHING ON SHOWMAX IN APRIL 2022:

To see everything on Showmax in April 2022, including the reality series The Real Housewives of Lagos, the Critics' Choice winning documentary The Alpinist, and the 2021 SXSX Jury Award winner I'm Fine (Thanks for Asking), click here.