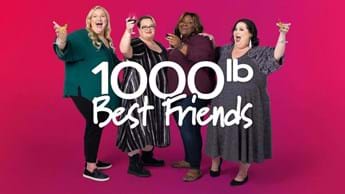 Meghan, Vanessa, Tina and Ashley are larger-than-life best friends who are battling morbid obesity together under treatment from Dr. Procter (the bariatric surgeon from TLC series 1000lb Sisters Too Large). They’re tackling the hard work with heart and a wicked sense of humour.

You could call them “accountabilibuddies”. Meghan and Vanessa go way back as old school friends who supported one another through constant bullying from the age of 15. TLC viewers have already been watching their struggles in Too Large Season 1. Now Tina and Ashley have joined their team as they encourage one another to keep trying – and Meghan is actually living in her lifelong friend Tina’s basement apartment. They’ll also be taking time off to go camping together and trying to have fun, despite the physical struggles of daily living. “The four of us, we have a different perspective of the world than thinner people. And it's nice to have people you can talk about those things with and not feel shamed for,” Tina says in the show.

Along the way we’ll get to sit in on the 4 friends’ therapy sessions, and discover the real mental struggles of morbid obesity, the damaging effects of how the world treats you, and what it’s like to live with a constant feeling of failure and fear for the future.

“I'm sick and tired of being fat and tired," insists Vanessa, who’s hoping that having 3 friends to back her up will light a fire under her. And she better get burning, because Dr Charles Procter warns her in the show, "If you don't find a way to do this, you're not going to be around for much longer."

43-year-old Meghan enjoys crafting, gaming and make-up. She has a fiancé named Jon who’s 10 years her junior. You’ll meet him in the show. Meghan weighed nearly 500lb (227kg) before she had bariatric surgery. She has since lost 68kg. “If it’s fun, then it doesn’t feel like exercise,” she says. “But unfortunately it’s not easy being big girls. We have a long way to go, but we’re never going to stop trying.”

42-year-old Vanessa has been unable so far to stick to the diet necessary to qualify her for surgery. When her husband died in 2016, Meghan spiralled, gaining around 100lb (45,4kg), and she’s now trying to understand the mental aspect of the eating patterns that drive her weight gain. Vanessa says in the show, “I’ve struggled with my weight my entire life, and now I’m over 400lb (181kg); I just can’t seem to stick to a diet… When I’m with the girls, I feel way more empowered.”

41-year-old Tina has known Meghan since she was 15 years old, too. In 1000lb Best Friends, she’s starting over again having gained back a substantial amount of weight, pushing her up over 136kg again. But she’s wary of weight loss surgery, having heard of too many operating table deaths. Tina is a published writer, covering topics of body positivity and body shaming. She and her husband Johnnie have 4 kids together and Tina wants to lose weight so she can do more fun activities with them.

Weight has been a lifelong issue for 36-year-old Ashley. She had previous gastric sleeve surgery in 2014, but has since put back on the weight she originally lost.“ I just thought that the sleeve could do all the work for me, and I can just eat junk food and still lose weight,” she explains in one episode. “You can tell when I’m walking, being extremely tired after work, not being able to stand for long periods of time and that makes me nervous.”

American fans compared the 1000lb Best Friends to the Sex And The City fab four and concluded that Meghan is the Carrie, Vanessa is the Samantha, Ashley is the Miranda and Tina is the Charlotte. What’s your take?

TLC (DStv Channel 135) is available on DStv Premium, Compact Plus, Compact, Family and Access. To upgrade your existing package, click here. Or if you'd like to Get DStv, find a service that suits your needs here.