A three-part series to be broadcast on DStv, Two Sides tells the story of the tour by The British & Irish Lions that was punctuated by drama, struggle and triumph. 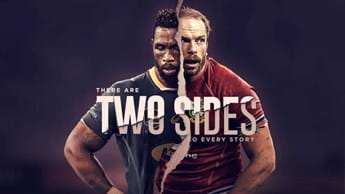 SuperSport and M-Net will be rolling out the first of several locally-made sport documentaries in the first quarter of 2022. Following the recent success of “Chasing the Sun”, the World of Champions has another major rugby documentary in production. A three-part series to be broadcast on DStv, “Two Sides” tells the story of the tour by The British & Irish Lions that was punctuated by drama, struggle and triumph. What makes it unique is that it will be a film told through the eyes of both protagonists.

Made by the producers of “Chasing the Sun”, also featured are the environments some of the players emerged from with footage of friends and families of Maro Itoje, Pieter Steph Du Toit, Liam Williams and others adding to the extraordinary narrative.

The film takes in numerous events, including the drama of the tour’s status in the build-up, the Covid outbreaks in both camps, the impact of civil unrest and the tension of the down-to-the-wire finish.

“The film is a heartfelt celebration of the game’s longest-standing Test tour and the brotherhood that comes along with it,” said Marc Jury, chief executive of SuperSport. “In the midst of unprecedented challenges and hardship, it is a reminder of the values of the game we love so dearly. The film is a story of sacrifice, courage and a belief in the power of sport.”

Later in 2022, SuperSport will lift the lid on “Rassie”, which for the first time tells the full – and astonishing – story of Rassie Erasmus’ rise from the backwaters of the Eastern Cape to the top of the rugby world.

M-Net (DStv Channel 101) is available on DStv Premium. To upgrade your existing package, click here. Or if you'd like to Get DStv, find a service that suits your needs here.