Watch to watch on DreamWorks (DStv Channel 304) on DStv 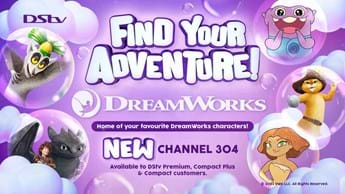 It’s all adventure, all fantasy and all fun. And it’s all here for you right now on DStv – just in time for the school holidays!

DreamWorks – the 24-hour channel dedicated to kids and family entertainment – launches on DStv from Friday, 18 March, as DStv Channel 304, which you can also watch via the DStv App.

Over the years, DreamWorks has brought us fun animated adventure movies like Shrek, The Croods, Madagascar and How To Train Your Dragon. Now our favourite characters from these films, like the ridiculous ring-tailed lemur King Julien from Madagascar and the swashbuckling bandit Puss In Boots from Shrek, are here in their own series, along with the new Voltron series and Turbo the snail from the Turbo movie.

There are classic characters for little kids to love, too, including our old Toyland friend, Noddy, and those singing vegetables from VeggieTales, whose songs will be stuck in your head for years. And wait ’til your obsessed little kids meet the DinoTrux – part-dinosaur, part-construction vehicle – let’s just say we advise you to step aside to avoid the stampede to the TV couch.

DreamWorks (DStv Channel 304) will be available in South Africa to all DStv Premium, Compact Plus, Compact customers. Access and Family customers get to enjoy an open window from Friday, 18 March-Tuesday, 19 April on DStv.

For the big little kids (including you)

King Julien the party-loving lemur from the Madagascar films is here to spread “wisdom”, confusion and a good time as he takes on the wildest adventures that the jungle has to offer, along with his second‐in‐command Maurice, and the eternally devoted Mort. All hail King Julien, bow to the righteousness of his proclamations, and tickle his feet.

Dragons: Race To The Edge Season 1

In this series based on the How To Train Your Dragon films, Hiccup and Toothless lead the Dragon Riders beyond the borders of Berk as they follow the mysterious Dragon Eye, which is filled with ancient secrets that lead them to new lands filled with previously undiscovered dragons. But marauding dragon hunters are hot on their heels, wanting the powers of the Dragon Eye for themselves.

The Adventures of Puss In Boots Season 1

The Shrek films’ suave, swashbuckling, hairball-hacking hero is back! The boots are on and Puss has to pounce into action after he accidentally breaks the magical spell that protects the hidden city of San Lorenzo. Puss must now protect the daffy townspeople from all manner of villains, and become a fighting legend. Meow, mew, pussycat!

Dawn of The Croods Season 1

The world’s “first family” is back in their own sitcom! Eep, Grug, Thunk, Ugga, Sandy and Gran deal with modern-day problems using ancient Croodaceous era technology and reasoning. Check out school, slumber parties and elections from a Crood point of view.

Mr. Peabody, the slow-talking, smartest dog in the world, and his boy, Sherman, host a late-night comedy show together, which they broadcast from their swanky penthouse in front of a live studio audience. Anything can happen with their great musical acts and special guests like outrageous neighbours and time travellers.

Turbo the snail gathers his posse of adrenalin-fuelled snail pals to form the Fast Action Stunt Team, or "F.A.S.T”. There’s no adventure too extreme, or no prank too outrageous to these action molluscs, who always wear a helmet. Whether they’re solving mysteries or meeting strange new insect enemies, Turbo, Chet, Whiplash, Burn, Smoove Moove and White Shadow put their need for speed to good use.

This action-adventure series is a reimagining of the Voltron show from the mid 1980s. 5 teens are snatched up from modern day Earth and flung into the middle of a war for control of the universe between the forces of good and evil, during which they become pilots for 5 robotic lions that can join together to form the mighty robot warrior known as Voltron, Legendary Defender.

Noddy the cheeky little elf goes on adventures in Toyland along with his friend, Bumpy Dog, in this series based on Enid Blyton’s book series. He’ll have to figure out how to deal with everything from goblin gizmos to inept pirates, with his trademark humour and enthusiasm.

Raa Raa the lion cub and his friends are a big part of what makes the Jingly Jangly Jungle such a loud, fun place to be. While they learn about the world around them, they also explore the meaning and value of friendship, and the sources of various noises.

Why do Zebra have stripes and Leopard spots, Rhinos horns and Camels humps? Tinga Tinga Tales tells a modern, young audience fun stories about what really happened way back when the animals first came into being and grew into the shapes and colours that we know now.

Welcome to a world of giant creatures that are half-dinosaur, half-construction vehicle, and 100% Roarsome! Ty Rux, a massive Tyrannosaurus Trux, and his best friend, Revvit, a razor-sharp Reptool, join forces to build a bigger, better world and battle back against the evil D-Structs, who threaten to wreck everything they’ve built.

VeggieTales In The House Season 1

Bob the Tomato, Larry the Cucumber and all their veggie friends venture off the countertop and into the wide world to deliver life lessons that little kids will find familiar, through witty, silly songs that grown-ups will find delightfully catchy.

Watch VeggieTales In The House Season 1 from Friday, 18 March on DreamWorks (DStv Channel 304).

DreamWorks (DStv Channel 304) will be available in South Africa to all DStv Premium, Compact Plus, Compact customers. Access and Family customers get to enjoy an open window from the 18 March - 19 April on DStv (Channel 304)

To upgrade your existing package, click here. Or if you'd like to Get DStv and find a service that suits your needs here