Welcome to the vast place 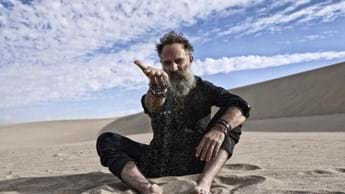 South African actor and musician Neil Sandilands is a man driven by the wind. It blows him around the globe these days, today he’s filming the second season of international fantasy series Sweet Tooth in New Zealand. Before that he was filming fantasy drama Day Six in California, and Showmax psychological thriller Dam Season 1 in South Africa, where he also worked on his new album, Sangoma Sandilands & Jou Pa se Posse, in collaboration with some of South Africa’s best loved artists, including David Kramer. He has also executive produced a new series for M-Net (DStv Channel 101) that will be coming our way soon.

But in late 2021, the wind took him somewhere truly extraordinary: to the dunes, wilds and forgotten places of Namibia. He’ll be sharing his adventures with us in the brand-new kykNET (DStv Channel 144) travel series Die Groot Niks, which is the brainchild of the La’t Wiel boys, Hannes Visser and Waldo van der Waal.

“This jewel of a programme happened at the right time of my life,” says Neil. “When Waldo and Hannes contacted me at the beginning of 2021 with the concept and the title of the series, it was a very easy yes from me. I have been to Namibia twice and each time I stood in amazement of the magical and challenging experience which is breath-taking and frightening at the same time. To explore the area between Lüderitz and Walvis Bay, in the oldest desert on Earth, is a privilege that comes along very, very seldom.”

Welcome to the sandy land

The Namib desert was declared a World Heritage Site by UNESCO in 2013. In the language of the Nama people, Namib means “vast place”. It’s a place of secrets and wonders, natural beauty, and fascinating evidence of man’s struggle to get a foothold on its shifting sands. The series will set Neil in the heart of the Namib, between Lüderitz and Walvis Bay.

Long-time TV fans will recognise the voice of veteran TV presenter and journalist Ruda Landman narrating the series. And Neil remarked on his Facebook page that viewers will see 1 of the most authentic versions of himself he’s ever brought to screen, as a presenter. Not “hiding” behind a character turned out to be a cool way for him to be in the moment. And sometimes that moment was silly. As he joked in 1 post, “I can't remember what I was saying here, but you can clearly see the mic pack. I think it was something like "the irony is not lost that my last name is Sandilands…"