A nibble of nostalgia 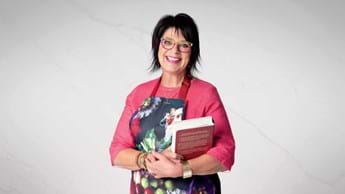 Food is such an integral part of people’s lives,” says foodie and TV personality Marinda Engelbrecht, who’ll be inviting us into her kitchen for her brand-new cooking show, Stoofstories Met Marinda, this February on VIA (DStv Channel 147). “From births and weddings, to birthdays and funerals, every event is accompanied by food. And at every 1 of these occasions, stories are told and memories are made. And that’s what my guests and I do while we cook dishes that evoke memories that might be good or bad,” says Marinda. “It’s a sweet-and-salty show: sweet for what makes you smile, salty for what brings tears to your eyes.”

The guests and the dishes

For the series of 13 episodes, Marinda enlisted the help of her good friends and veterans in the entertainment industry to cook up some nostalgia with her. “The actress Elsabé Daneel (Brenda in the drama series Alles Malan, now on Showmax) is my first guest, and together we’ll laugh and cry as we make Elsabé’s mom’s tomato bredie (stew). It’s an emotional memory for Elsabé: She held her mother’s hand on her deathbed, and for a split second her mother, who suffered from Alzheimer’s, recognised Elsabé before she peacefully drew her last breath,” explains Marinda. “It’s a powerful memory and the tears flowed.”

Other guests who’ll be making their appearance include Sandra Prinsloo (Natasja in the online telenovela Die Testament), Albert Maritz (Frans in the drama series Dwaalster, now on Showmax), and musician Koos Kombuis. “We’ll be making sweet and salty dishes like melkkos (a sweet porridge), vanilla ice cream with pears soaked in red wine, fish with a beer batter, and chicken biryani.”

Marinda and only Marinda

Marinda admits that it wasn’t easy to convince all her guests to appear in her new show. “I phoned Albert Maritz and initially he was hesitant because he’s not very comfortable in the kitchen. I respected his decision and left it there, but 10 minutes later he phoned me back and said that he would, in fact, appear in the show but only because he knows me so well and wants to cook with me – and only me,” boasts Marinda.

Albert will make his appearance in episode 2 (16 February), and Marinda reveals that together they’ll be making delicious goat’s milk cheese rolls and a special peppermint crisp tart. “Everything I make in my TV shows are things that viewers can make in their own kitchens. I’m not professionally trained; I cook from the heart,” says Marinda.

The cook with the look

Marinda likes colour – both in her dishes and in her appearance. Every morning she chooses 1 of her many pairs of glasses that she wants to wear that day, and that determines her outfit. “I’m blessed to be the owner of 46 pairs of multifocal glasses, sponsored by Spectacle World in Cape Town,” says Marinda. “I love my glasses with frames of all different colours. It’s my thing.”

When she isn’t cooking, Marinda pursues her other passion: compiling guidebooks for children (Marinda is a qualified teacher). “My newest cookbook, Marinda Se Kinderkombuis – Met Sjef Sout En Prof Pretzel, was released last year, and I’m currently working on a children’s information booklet about asthma, as well as an eyecare guidebook for children for the pharmaceutical companies Cipla and Zeiss, which they want to release internationally.”

Other projects on the horizon for Marinda in 2022 include the launch of her potjiekos (iron pot stew) sauces, as well as the filming of Laat Die Potte Prut: Kampioene, which will air on VIA in April. “I’m co-presenter along with Alvin Bruinders of the flagship series Laat Die Potte Prut (now on Showmax). The contestants are the top teams of previous seasons of Laat Die Potte Prut,” explains Marinda. But for now, it’s time for a few laughs and a good cry in Stoofstories.

Watch Stoofstories Met Marinda Season 1, Wednesdays at 17:00 from 9 February on VIA (DStv Channel 147)

VIA (DStv Channel 147) is available on DStv Premium, Compact Plus, Compact and Family. To upgrade your existing package, click here. Or if you'd like to Get DStv, find a service that suits your needs here.