Queen Bees and Wanna Bees in The Gilded Age Season 1 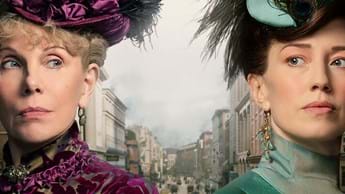 This American period drama series created by Julian Fellowes is set in a time of outrageous extravagance in what was then the richest city in the world – the New York City of the late 1800s. It was discreet battleground, where the old money “aristocracy” were fighting off the “robber Barons” who’d made their fortunes in trade and industry, and were using that capital to buy not only the latest clothes from Paris, but social capital, too, as they married their daughters off to European aristocracy. Imagine a bloody war fought over the teacups, where cutting glances drew blood and ridicule could ruin your chances.

When newly fatherless young Marian (Louisa Jacobson) steps into this world after coming up from the country, she finds herself on the frontlines, caught between her Old New York aunts, who are determined to keep their social circle limited to just an impeccable 400 finest families of fortune and birth. But money talks and when a new super-rich family moves into upper New York, their very existence threatens a community that resists change. It’s as if Jeff Bezos is going to dismantle their town bridge so that he can float by in his new superyacht… but much, much worse.

The Gilded Age’s old-money New Yorkers react to the new money onslaught much the same way that Hollywood reacted when the Kardashians started making waves with their reality show, Keeping Up with The Kardashians. Oh, the fury and the outrage!

American actor, filmmaker, and comedian Jonah Hill ranted at the time, "The truth of it is, I have friends who work in TV and the Kardashians get higher ratings than their TV shows. Shows that people actually work hard on – writing and creating and trying to tell stories. The fact that the Kardashians could be more popular than a show like Mad Men is disgusting. It's a super disgusting part of our culture. Whenever I say I like reality TV, people write about it like they're in shock. I can't even understand it, so I watch it. I think it's funny and I definitely enjoy it in a making-fun-of-it sort of way, but where does the line sort of end? When do I stop making fun of it and become an actual fan?" If you’ve been watching The Gilded Age already, can’t you just hear Agnes whispering in your ear?

Another fear for many was the type of influence the Kardashians had on the global youth – people were afraid that young people would grow up with the perception that actual talent and hard work weren’t necessarily part of the formula to being successful (as if they really ever were). Following yet another of Kim K's naked tweets, American actress, Chloë Grace Moretz replied: "@KimKardashian I truly hope you realize how important setting goals are for young women, teaching them we have so much more to offer than just our bodies."

Like the grumbling Hollywood elite, The Gilded Age’s old-money New Yorkers are not very open to all the “modernity” that the Russell family represents as they build their fancy new mansion with every modern convenience right across the road, and as a result, forbid their children from even interacting with the new family.

As a young unmarried woman in that era, Marian is being groomed and positioned in society and the “marriage market” as 1 who would be the perfect wife – but only to sons that belong to old-money families, as expected. This is not easy for young, liberal Marian, as she has already established a friendship with the Russell son – who in turn is quite fond of her. Apart from the love department, Marian is finding it difficult to adjust to high society’s rules. This country girl is now not allowed to step out of the house alone, and she’s not allowed to have a career. Her friendship with a young African-American Peggy Scott, however, affords her opportunities to explore other options without being caught. But how far can she explore before she goes “too far”?

Get into it! Catch up notes

The Van Rhijn/Brook family, to which Marian and her aunts belong, is an old-money family headed by a widowed matriarch named Agnes Van Rhijn (Christine Baranski), a stubborn socialite who strictly adheres to the values of New York Society. She and her poor spinster sister, Ada Brook (Cynthia Nixon), take in their niece, Marian Brook (Louisa Jacobson), after the death of Marian’s father, their estranged brother. Once their brother left them with nothing, now he has done the same to his daughter.

Agnes is scandalised when the Russells, a new-money family, moves into a new, lavish mansion across the street from their home. Bertha Russell (Carrie Coon), the wife of robber-baron George Russell (Morgan Spector), is determined to make her mark on high society New York, but quickly learns that the old-money wives don’t accept her into their exclusive inner circle.

Now because Marian doesn’t understand why her aunts are so stubborn and set in their old ways, she questions them quite often – a trait that irritates her one aunt, Agnes.

Episode 1: Marian Brook inherits just $30 following her father’s death, Marian and Peggy make friends. Bertha Russell vows revenge after none of the high society folk she entitled show up at her party.

Episode 2: Betha sets her sights on making a splash through charity work but gets snubbed again, George Russell buys out a charity auction to slap down the high-society ladies who shamed his wife but he will find out that being petty has consequences, and the Russells initiate the powerful and influential Morris family to dinner to George can make deals for a new railway. Meanwhile Agnes’s secretly gay son Oscar (Blake Ritson) makes plans to flirt with the Russells’ young daughter, Gladys (Taissa Farmiga).