From fame to farm

Harry Thornton taking about overcoming anxiety, making friends, fighting and why he doesn’t like pigs in Relatively Famous: Ranch Rules Season 1 on DStv 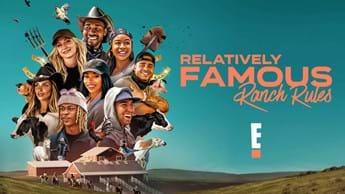 Being a prop master in Hollywood is a pretty awesome job, but first impressions are next level when you realise that this prop master, Harry Thornton. He is the son of Academy Award-winning actor Billy Bob Thornton, His former step-mother, Angelina Jolie, still sends him Christmas presents.

In the new E! (DStv Channel 124) series Relatively Famous: Ranch Rules, Harry and 7 other people in their 20s who could legitimately name-drop Mom & Dad are off to a ranch in Colorado, where they’ll get their hands dirty with the daily chores like sheep shearing, horse shoeing and inseminating cattle. You know, the serious stuff, not the fun lamb feeding-type jobs they give to the regular guests! Conditions are so tough, in fact, that 1 of the cast taps out before the end of the season.

It’s 1 heck of a way to meet new people. And when tempers fray, dinner and plates go flying! Harry, in particular, sets off the first fight of the season when he shares an opinion he might have kept to himself.

We chatted to him about getting on the show, making new friends and more.

How did the Relatively Famous: Ranch Rules producers pitch the show to you?

“They just said that it's a bunch of celebrity kids, and we're gonna go on a ranch. I don't think anyone knew how hard it was actually going to be. They didn't even tell us where we were going until the week (that we went), when they told us it was in Colorado. And we just didn't know how much hard work it was. The week leading up to it, I was really nervous about it. And I actually drove there so I had a lot of extra time to sit there and think about it.”

Before going on the series, what's the closest you've been to a sheep or a pig?

“I don't have any memories of messing with a sheep. But I always try to stay away from pigs. They just make me think they're really gross. I think my dad and I must have gone to a Hawaiian Luau when I was younger, so maybe that's what traumatised me about pigs. I've just never been a big fan.”

What was your first impression of the other 7?

“I didn't know who I was meeting. They didn't tell us their names or who their parents were. I just knew they were children of celebrities. I was shocked, because these are people like the daughter of Martin Lawrence. I grew up watching his movies and his daughter, Jasmine, is on the show. There were certain names, and it was just like, “Wow, that's really cool!” But they were really down to earth, that wasn’t what I expected.”

Who did you bond with early on?

“When I met everyone, I was really nervous about the experience. I home-schooled and so I didn't have a lot of friends growing up. Some other kids say how they were nervous about doing ranch work, or farm work, or whatever it's called. But for me, it was meeting new people that I've never met before. I have anxiety issues. With Jasmine we immediately had – well, not immediately but within the first like week or two – I think we had a connection. Once I met everyone, they were so friendly.”

Did you get the wrong idea about anyone at first?

“Well, when I met Austin, I knew we might have some problems from the second I met him, because he's kind of… I don't know. I didn't know if our personalities would really mesh. Which, at points they didn't. I don't know anything about wrestling. I feel like all the (other) kids were from LA and I knew who most of their parents were, or I’d heard the name. But when it comes to Austin, I wanted to know a little more about him because I didn't know who his dad was and I don't follow wrestling and he's also from another state.”

How did the production staff guide or help you?

“I'm a prop master, so I'm 1 of the crew guys myself. I think they were an amazing crew and the way they ran it was great. If we ever needed anything, they were always there. The Medic, Jim, was amazing. He helped us out a lot. I still talk to some of them today. They're really nice people.”

Did watching the show shift your own perception of anything you did at the time?

“You have to remember on the show, we were in a situation where we're stuck on a ranch with 7 people we've never met before. There's arguing with people on the ranch. But it was a specific situation where we were taken away from what we're used to.”

How has being on the show affected you on social media?

“I always did Instagram, and I had a Facebook account but I never I never took it seriously. I wasn't 1 of those social media kids, I just follow close friends. But my following has grown, and I got verified!”

What did you enjoy about being on the ranch that you're carrying into your life after the show?

“I've always been afraid of germs, and really germ conscious. I would not say that I'm not now, but I was wrestling pigs, and stuff like that on the farm. So, I think I got over being so conscious of everything. And overalll, with my anxiety about social situations, I think I've gotten better with that as well.”

E! (DStv Channel 124) is available on DStv Premium, Compact Plus, and Compact. To upgrade your existing package, click here. Or if you'd like to Get DStv, find a service that suits your needs here.