Fresh reality and documentaries on DStv Family in January 2022 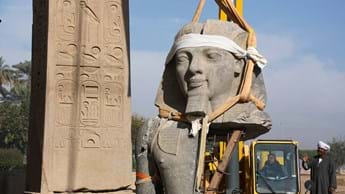 DStv Family has some stiff competition for you this January, with crossword champions going head-to-head in Huisgenoot Blokraaibestes Season 1, National Geographic’s contestant and dog teams taking on wilderness challenges in Called To The Wild Season 1, and a brand-new season of Sjefhuis to keep things sizzling in the kitchen.

Since we’re all starved for travel, DStv Family’s expert guides are taking us on some unusual journeys in series like Unknown Waters With Jeremy Wade Season 1, Lost Treasures of Egypt Season 3, Destination Fear Season 3 and Alaska Triangle Season 2.

If you’re looking for laughter and living your best life, don’t miss the daring comedy talk show Ziwe Season 1. Plus Rob Lowe takes you on a nostalgic trip through time in The '80s Top Ten Season 1, and Schalk Bezuidenhout plays matchmaker in Die Kliek Season 11.

And sit back for fascinating engineering and disaster shows with Air Crash Investigation Season 21 and more.

Keen for more? Here are the must-watch dramas and series coming to DStv Family this January.

Game show. Huisgenoot magazine is looking for South Africa’s crossword champion. In each episode, presenter Cintaine Schutte tests three contestants’ Afrikaans vocabulary and language knowledge in a series of challenges, while viewers at home try to beat them to the answers.

Watch Huisgenoot Blokraaibestes Season 1 from Monday, 10 January on VIA (DStv channel 147) at 20:00

Eight aspiring chefs (aged 18-25) share a house together for eight days in this reality competition show. They’re competing in a series of culinary challenges to win a 3-month apprenticeship with judge Chef Bertus Basson, as well as a cash prize. Crystal Donna-Roberts leads the action as host and kitchen companion.

Called To The Wild Season 1

In each episode of this adventure reality series, three new dog-and-human partnerships (including a champion Iditarod racing duo) compete to prove that they can thrive in the wild for at least 10 days while carrying out a series of challenges that will test their ingenuity, teamwork and endurance.

Watch Called To The Wild Season 1 from Monday, 10 January on National Geographic (DStv channel 181) at 19:00

Zoologist and passionate angler Jeremy Wade explores Earth’s most remarkable and least understood rivers, lakes and seas. Along the way, he searches for the bull shark at the mouth of the Amazon River, the Atlantis salmon in Iceland, and the Nile Perch in Kenya.

Follow international archaeologists during a full season of excavations across Egypt. Dr. Mohamed Megahed enters the largest pyramid of any queen of ancient Egypt. Dr. Kathleen Martinez explores a secret tunnel network beneath the temple of Taposiris Magna, and archaeologists find 1 of the earliest ever mummies.

The Destination Fear team is back on the road hunting down new paranormal adventures, while Dakota has some hair-raising experiments up her sleeve. Destinations include Waverly Hills Sanatorium, and Missouri State Penitentiary, where the ghost of a child killer reaches out to Chelsea.

Andrew Gough, Drew Patterson, Jeremy Ray and Mike Ricksecker take us into the frigid wilderness of Alaska on the trail of strange disappearances and bizarre sightings. Find out what’s making local wildlife attack humans, visit the ghost town of Skagway, hunt the sasquatch on Prince of Wales Island, and more.

Writer, comedian and internet sensation Ziwe hosts this variety and talk show with a focus on race, social justice and politics in the US. The series kicks off with a profile on the Karen phenomenon, before Ziwe tackles beauty standards, wealth hoarding and a gameshow to crown “The Wokest Ally”.

In this countdown franchise, host Rob Lowe re-visits the greats of the ’80s to reveal some unusual facts about the hot topics of conversation from the day, streetwear like Spandex, Air Jordans and shoulder pads, advertisements, gadgets, fast food and Toys.

In this lifestyle series, a celebrity returns to their hometown to invite family or friends to a grand celebration dinner at a local restaurant. 1 camera team will follow the restaurateur who’s preparing for the event, while another follows the celebrity around town as they revisit old haunts.

Talk show. Financial guru Theo Vorster offers a series of master classes aimed at helping people to make more successful decisions about their money. Watch as he guides this season’s 13 pairs who need some light shed on how to invest, save and spend wisely.

VIA’s popular dating show returns with the show’s original presenter, Schalk Bezuidenhout, back as host. In each episode, a panel of 8 single women snoop through single guys’ social media accounts. Those who like what they see get a chance to ask him some personal questions.

On 21 September 2001 at just after 10 in the morning, 300 tons of ammonium nitrate exploded in the AZF factory in Toulouse, France, killing 31 people. 20 years later, unseen footage and unpublished interviews step us through this industrial disaster, minute by minute.

Experts use re-enactments and CGI to uncover the truth behind aviation disasters that made headlines. This season, the 2014 lightning strike emergency landing of Loganair Flight 6780, the 2015 crash of Execuflight Flight 1526, the deadly 2006 Comair Flight 5191 crash following a runway mix-up, and more.

2-part documentary. Within weeks of Japan’s attack on Pearl Harbor, Nazi U-boats attacked American ships in sight of the North Carolina coast. Now marine archaeologists are on an historic mission to turn this battle’s graveyard into a protected sanctuary, honouring the fallen.

Enthusiasts use the writings of Nostradamus, along with paintings, to see whether they can decode the seer's prophecies. Find out what certain dooms they think are coming our way, including tsunamis, flood waters, volcanic eruptions, death from space, asteroid impacts, famine and war.

Life After Lock Up Season 3

Reality about prison pen pals turned lovers. John has plans for a pickup truck wedding, and Quaylon has a long, long way to go before Shavel’s family accept him, since they believe he’s guilty, and Shavel soon finds out that Quaylon is a big liar.

Reality. Billy Brown, his wife, Ami, and their 7 grown children – 5 boys and 2 girls – live so far from civilization that they can go 6 to 9 months of the year without seeing an outsider. They all sleep together in a 1-room cabin.