Celeb Ex In The City, When Big Things Go Wrong, and more intriguing documentaries and reality series on DStv Compact Plus this January 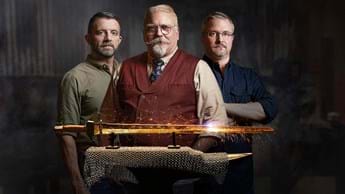 TDStv Compact Plus starts 2022 with reality series and documentaries that’ll turn easing out of the holiday season into a thrill ride!

It’s a feast for your eyes – and your brain – with the brand-new engineering documentary When Big Things Go Wrong, secrets from under the sands in the new archaeology and palaeontology series Egypt's Unexplained Files and Onder Die Suiderkruis, a journey inside the mind in Secrets of The Brain, and a flight into the unexplained with Red Dwarf star Craig Charles and astrophysicist Sarah Cruddas in Craig Charles: UFO Conspiracies.

And personal stories are amped to the max in reality shows like Forged In Fire Season 8, Beyond The Pole Season 2, and the wicked new MTV dating series, Celeb Ex In The City.

Keen for more? Here are the must-watch series and lifestyle shows coming to DStv Compact Plus this January.

The USA’s best makers of bladed weapons go head-to-head making everything from Viking battle axes to Samurai swords. This season’s challenges include making a miniature version of William Wallace’s broadsword, and in episode 6, they have to craft blades out of the runners on Father Christmas’s sleigh!

Celeb Ex In The City Season 1

12 sadly single celebrities are brought to London for a blind date, but 1 of their exes is going to crash the party. The celebs include Calum Best, Megan Barton-Hanson, Michael Griffiths, Amy Hart, Gatsby and Charlie from TOWIE, Malique Thompson-Dwyer and Aisleyne Horgan-Wallace.

Beyond The Pole Season 2

Reality. Strippers Lyric and Yaya clash during a tea party, and someone spreads rumours that Lyric had AIDS. Empress searches for her estranged son, Jasiah, her political views wreck Gigi's podcast, and Empress reveals the identity of her babydaddy, but her gender reveal party turns into an intervention. And Gigi plans to return to the pole.

Watch some of the biggest engineering failures ever caught on tape, as knowledgeable experts use graphics, analysis of the footage, and eyewitness testimony to explain what happened and why. Includes the Morandi bridge collapse and the connection between a Concorde crash, a British skyscraper fire, and a North Dakota train derailment.

Some archaeological finds in the sands of Egypt answer questions, others just provoke curiosity. See the discoveries that made people ask whether ancient Egyptians practised cannibalism, believe there really was a Scorpion King, and find out what made people fear the Crocodile Queen.

Secrets of The Brain Season 1

Neuroscientist Dr. Jack Lewis talks to people whose unusual neurological conditions give us insight into how our brains work. Meet the World Memory Champion, a man who can’t recognise faces, amputees who can feel their missing limbs, a woman whose sense of time is out of order, people with synaesthesia, and more.

Watch Secrets of The Brain Season 1 from Monday, 3 January on Curiosity Channel (DStv channel 185) at 19:00

South Africa hosts a wealth of archaeological and paleontological wonders. This series looks at the evolution of life, from the formation of the first landmasses, the first life, to the arrival of mankind, to today, as seen through our unique fossil record.

Explore 10 real-life cases and follow the investigation step by step, from the moment the crime is uncovered, to the slamming of the cell door. Crime specialists including detectives, forensics oﬃcers, medical examiners, cyber security experts, entomologists and prosecutors tell their sides of the story.

British seaside towns welcome floods of strangers every holiday season, but they bring death with them. This season’s cases include the Christmas murders by Jason Mitchell and Philip Manning, a killer who targeted vicars, and 2 bank robbers whose relationship turned deadly thanks to greed.

The Curse of Oak Island Season 9

The treasure hunters of Oak Island continue their 300-year search. Lagina brothers Rick and Marty brave the curse that claims that 7 people will die before the treasure is found. The body count is now at 6, and everyone has been reading the Templar map wrong!

All 9 living members of the Clan are interviewed, while their friends and collaborators tell their own stories. The documentary explores the musicians’ childhoods in Brooklyn and Staten Island, and explores the race issues that sparked some of their hardest-hitting tracks.

Psychoanalyst Dr. Orna Guralnik treats 3 different couples in this intimate documentary series. Dru is more attracted to his love than she is to him, Matthew is struggling with sober sex with his boyfriend Gianni, and Michal is finding her husband Michael’s laidback attitude more like apathy.

Paul Rivera created this talkshow set in a barber shop and hosted by LeBron James, in which guests hold conversations and debates around life and politics and share their career stories. This season’s guests include Jay-Z, Bad Bunny, Trae Young, Meek Mill, Jason Sudeikis, Keegan-Michael Key and Carmelo Anthony.

Everybody Hates Chris is not the full story. Go inside the life of comedian, actor and producer Chris Rock, from his school days to his fateful performance at Catch A Rising Star nightclub, to his hard fight to Hollywood superstardom, in this special documentary narrated by Diriki Mack.

Stacey Mc Gunnigle, Daniel Woodrow, go head-to-head flinging roasts at each other under the eye of judge Russell Peters in each episode. Watch these comedians trash Canada’s reputation for being nice, one sharply observant personal critique at a time.

Documentary. British actor Michael Enright had a career in film and television with small roles in series like Castle, Cold Case and Agents of S.H.I.E.L.D. But in 2015, after seeing a public execution online, Michael joined the Kurdish YPG to fight ISIS in Syria.

Nosy about how the rich and famous locals really live? We relive and revisit some of Hannes van Wyk’s trips to houses of legend like Emsie Schoeman, Wilna Snyman, Riaan Cruywagen and Hans Strydom, along with his chats with sports superstars.