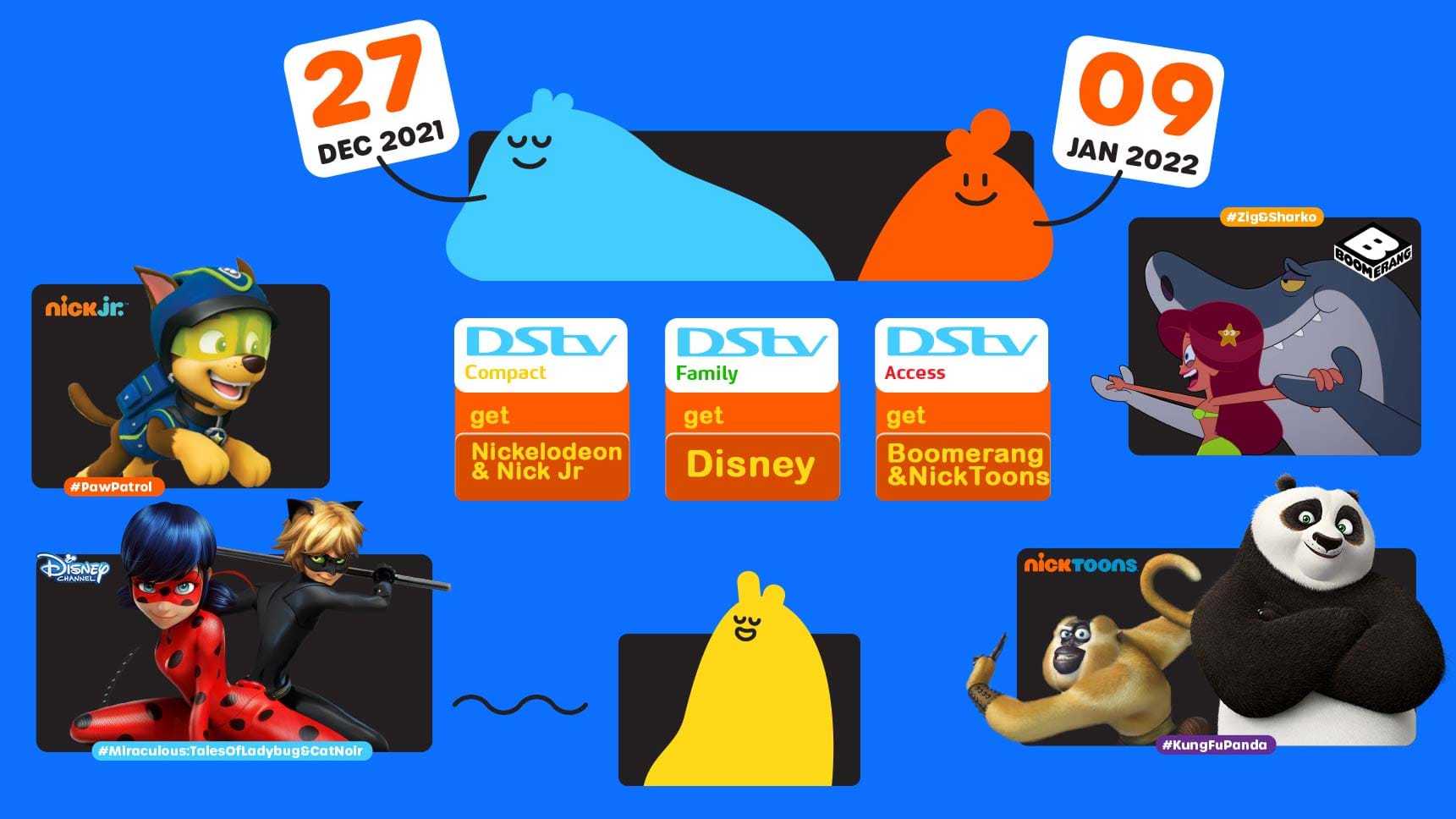 Keep the party going for your kids this holiday season with the exciting DStv Kids Open Window from Monday, 27 December to Sunday, 9 January.

When you stay connected to the DStv Compact, Family or Access packages, you will be able to introduce your kids to fresh new shows and friends to celebrate the start of a new year, at no extra cost to you!

And as your kids get to know some amazing shows and characters, they could also spot them hanging around Island Adventures, DStv’s engagement platform for children, which you can access via the MyDStv App. It’s free, it’s fun, it’s fabulous, and it’s made specially for your kids.

Plus, we’re giving you and your kids the chance to win one of 50 back-to-school hampers as part of the Kids Open Window. All they need to do is that the 5-question Back-2-School quiz between Monday, 27 December and Sunday, 9 January to stand a chance to win. The quiz can be found in the Island Adventures game, so download the MyDStv App to play now!

Nickelodeon’s (DStv channel 305) live-action series are a smash hit with older kids and tweens, and each afternoon in January your kids can become part of the superpowered family The Thundermans. They all have different powers, needs and goals, but their real superpower is working together.

And Nick Jr (DStv channel 307) has new seasons and series for the mini-kids. Watch out for fun and music in Baby’s Shark’s Big Show, and family adventures with Peppa Pig.

PS: If your kids love these shows, Nickelodeon and Nick Jr are available on the DStv Premium and Compact Plus packages. To upgrade your existing package, click here. Or if you'd like to Get DStv, find a service that suits your needs here.

You know the viral song, now see the series! This education series targeted at preschool-aged children follows the adventures of Brooklyn “Baby” Shark, who often gets things wrong, along with her extended family and friends. Expect catchy music, bright animation, humour and social learning for the little ones.

The brand-new season brings kids 2 episodes of fun with Peppa and her relatable family, every day. The series celebrates imaginative play along with social lessons about making friends, sharing and fairness, as well as including some big holiday episodes. And who volunteers for a parachute jump to raise money for the school? It’s Mummy Pig!

The Thundermans are a family of superheroes. If you love The Incredibles, you’ll know the struggles that a Super family must go through to live “normal” lives – especially when the 2 oldest kids, Phoebe and Max, have super-charged their friendly sibling rivalry. It’s Thundermans time each afternoon in January 2022.

Watch Thunder-Noons from Monday, 3 January on Nickelodeon (DStv channel 305) at 17:15

Older kids and tweens have adventure and mystery in store when you pop them over to the Disney Channel (DStv channel 303) for new series and movies, including a classic Disney movie every day at 11:05 from Monday, 3 January to Friday, 7 January.

PS: If your kids love these shows, the Disney Channel is available on the DStv Premium, Compact Plus and Compact packages. To upgrade your existing package, click here. Or if you'd like to Get DStv, find a service that suits your needs here.

The Secrets of Sulphur Springs Season 1

Prepare to test your imagination! 12-year-old Griffin Campbell’s family moves to the small town of Sulphur Springs where they take over the abandoned The Tremont Hotel, which is said to be haunted. Griffin and his new friend Harper travel back in time and search for the key to this mystery.

Watch The Secrets of Sulphur Springs Season 1 from Saturday, 8 January on Disney Channel (DStv channel 303) at 19:05

Tangled: Before Ever After

This stylishly animated sequel to the 2010 Walt Disney film Tangled serves as the pilot for the Rapunzel’s Tangled Adventure animated series. The story focuses on how Rapunzel adjusts to the life of a princess and her determination to have 1 last adventure – especially after her magical golden hair returns.

Watch Tangled: Before Ever After on Monday, 3 January on Disney Channel (DStv channel 303) at 11:05

You can see a Disney Channel Classic movie every day at 11:05 from Monday, 3 January to Friday, 7 January.

Plus new episodes of

NickToons (DStv channel 308) is the go-to channel for big little kids (around ages 7-9) and Boomerang (DStv channel 302), which kids aged 4-6 and up will love. But don’t take our word for it. With NickToons’ 2-hour New Year’s Party, and Boomerang’s Movie Stars and Boomerang Club specials, your kids will get an introduction to all the shows and characters that make these channels great.

PS: If your kids love these shows, NickToons and Boomerang are available on the DStv Premium, Compact Plus, Compact and Family packages. To upgrade your existing package, click here. Or if you'd like to Get DStv, find a service that suits your needs here.

Celebrate the New Year with fun episodes of SpongeBob SquarePants, The Loud House, The Casagrandes and It’s Pony in this 2-hour weekend stunt!

Watch Boomerang Club on Saturdays and Sundays from Saturday, 1 January on Boomerang (DStv channel 302) at 06:35

These are Boomerang’s short-movie length episodes following the adventures of chaotic classics like Tom & Jerry, the Looney Tunes and Scooby-Doo. With such familiar faces, this is worthy of some real family sit down together time.

Watch Boomerang Movie Stars on Saturdays and Sundays from Saturday, 1 January on Boomerang (DStv channel 302) at 10:10

Plus new episodes of…