Family Shows to Watch on DStv this December

Family fun with DStv this December

Friends, kids, grandparents and you – together around the TV with DStv this December 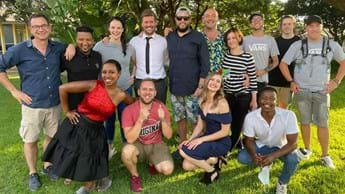 It’s a season of love, laughter and true togetherness when you Choose Joy with DStv this December. Just peek under your DStv tree and you’ll find so many shows filled with innocent fun, creativity and holiday spirit that you can enjoy as a family.

The cooking shows will grab even the kids’ attention. They’re filled with spectacular creations from the likes of Buddy and Duff and The Great British Bake Off, ice sculptors team up with bakers to make crazy cakes in Santa’s Baking Blizzard, and there’s local flavour, too, when Minki challenges 3 chefs to make something marvellous for us.

There are movies for everyone, from Mickey & Minnie Wish Upon A Christmas, which will delight everyone from the tinies to the grandparents, to family friendly local movies like Nativ(ity) and A Zulu Christmas. These are films filled with the magic and wonder of the season – like First Christmas, The Christmas Market and A Gospel Christmas – that celebrate our love for our homes and our communities. And where there are love stories involved, things stop at a sweet kiss.

Our Christmas stocking is stuffed with specials like Royal Variety Performance 2021, ’n Ster Vir Kersfees, The Cube Christmas Special, and Supervet Christmas Special 2021, along with family-friendly shows like Kids Say The Darndest Things Season 2, Hot Mess House Seasons 1 & 2, Meet The Meerkats and Flexible Buildings. And there are kids shows that will have grownups rolling, too, like Bugs Bunny’s 24 Carrot Holiday Special.

Whatever your family’s tastes, there’s something for everyone. And there’s so much more to see when you Choose Joy with DStv this festive season.

Prepare for a Christmas adventure! The 3 Wise Ones (Elana Afrika-Bredenkamp, Robbie Kruse and Stella) are searching for the true Christmas spirit, leading us from star to star and song to song as they travel around South Africa visiting many of kykNET's favourite people and places. Look out for Solomon Cupido!

Tiffany Haddish hosts this variety show that reveals how little kids think about the world – to comic effect. This season, Tiffany’s talking wig makes one of the kids feel special, and she takes her little players to meet Drew Carey on the set of his own show, The Price Is Right.

Watch ME now Set a reminder

Rob Delaney narrates this animal “soap opera” that follows the fates of 2 meerkats mobs rescued from animal trafficking, as they adjust to life in the Kalahari Desert. See the birth of baby meerkats, watch how a single mom struggles to raise her brood alone, and see how the meerkats hunt, flirt and survive.

Phillip Schofield hosts as Celebrities face intense pressure while they try to beat The Cube at its bizarre and difficult mini-games like Attract, Loop, Pathfinder and Dead Stop. If they beat The Cube, they will win £250,000 (about R5 million) for their chosen charity.

The Greatest At Home Videos Season 2

Host Cedric the Entertainer showcases viral home videos captured during social distancing and the COVID-19 lockdowns. This season, choreographer and singer Paula Abdul helps Cedric to surprise a family, Cedric has a zoom call with 2 military buddies whose reunion moved the country.

A Quebec-based troupe of comedians ambushes the unsuspecting public in this prank show. This season, see what happens when a thief steals grapes, the public reacts to an ugly baby, a bride falls over, a comedian pretends to spit-wash their cellphone, and more.

weekdays from Wednesday, 1 December on Comedy Central (DStv channel 122) at 22:30

Surrounded by so much clutter that you don’t even know where to get started organising your house? This is your show. Organising expert Cas Aarssen helps clients to take control of their messy spaces by finding an organising style that will come naturally to them, then supporting them online as they set things to rights.

As populations grow across the world and urbanisation soars, the pressure is on architects, engineers and urban planners to come up with the kind of buildings that can grow with our changing needs, and that take care of social needs rather than further dividing populations along financial and political lines. Part of Super Science Mondays.

It’s Buddy and Duff in this 4-episode baking competition. Each week, the 2 cake artists will choose a different theme and then they and their teams will have just 20 hours to create a masterpiece each. Judges include Gesine Prado, Elizabeth Falkner, Stephanie Boswell, and Valerie Gordon.

Briony and Terry from Bake Off 2018 series face off against Tom and Yan from Bake Off 2017. They make Christmas cake pops, a sausage roll wreath, and gingerbread showstoppers, so we see everything from a castle to a train station to a skyscraper.

Take inspiration from chefs and foodies Nic van Wyk, Yolani Abrahams, Jacques Erasmus and Zoë Brown. They'll compete to see who can come up with the most inspired dishes over three rounds of cooking, and host Minki van der Westhuizen will decide who wins.

The scene is set for a lavish, snowy Christmas feast at Nigella’s house. Her menu includes food from cold countries around the world including Linzer cookies and vegan gingerbread, pink pomegranate cocktails, smoked salmon on black bread, and Norwegian pork ribs with Swedish-inspired Jansson’s temptation.

Chef and food writer Rory O’Connell travels across Europe, visiting a different city in each episode – Palma de Mallorca, Vienna, Lisbon, Madrid, Bath, Nantes, Copenhagen and Edinburgh – to learn about the culture and the cuisine.

In this brand-new Disney movie, 11-year-old Ro (Scarlett Estevez) is expecting a dismal Christmas thanks to her parents’ recent divorce. But when she makes a special Christmas wish, she finds herself living Christmas Day all over again… and again… and again. In order to break the loop, Ro must learn to love her new blended family.

A small town’s mayor, Alex (Brooke Nevin) decides to hold a special Christmas market to help local businesses that are under financial pressure thanks to a disruptive construction project. She’ll need everyone’s help, including that of the reclusive mill owner, Darcy (Corey Sevier) and romance sparks when she goes to invite him to the event.

Mickey & Minnie Wish Upon A Christmas

Mickey, Minnie and the gang wind up split all over the world after a series of mishaps, and they must all try to get back to Hot Dog Hills by Christmas Eve. Then a jolly stranger tells them about The Wishing Star, which could be the key to bringing everybody home in time to celebrate the holiday together.

Watch with the kids

The Treehouse Stories: The Christmas Feast. A wolf, a fox and a weasel have a Christmas feast with a turkey.

Darwin & Newts: Kiwifruit Valley Christmas. Our friends work together to create a Christmas celebration full of aroha after a Christmas Eve storm wrecks the festive preparations.

Do You Know? At Christmas. Maddie meets Santa’s favourite helper, the reindeer, and discovers how Christmas decorations are made!

Did You Know? Making Christmas Special. Tips on decorating, and spotting fake money and gifts.

24 December at 06:25: Topsy & Tim: Five-year-old twins Topsy and Tim decorate the tree on Christmas Eve with mom, dad and granny, and the even see Father Christmas on his sleigh.