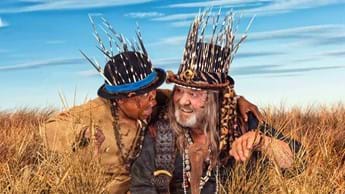 Sixty years ago, in an obscure corner of Africa, the only survivor of a light aircraft crash was a baby boy. Perhaps it was the miracle of his survival which gave him the gift of “sight”, and he became a Sangoma, the seer of the Kuvuki tribe, interpreting the wishes of The Great One through the throwing of the bones. Hence his name – Bones (Schuster). Today, at an advanced age but still fit in mind and body, his mission is to pass on his wisdom to his son, Mathambo (Ntombela), and guide him into manhood, a mission doomed to fail because of both of their obsessive personalities.

The storyline of Mr. Bones 3, Son of Bones begins at the turn of the last century, when we witness (flashback) the burying of the Kruger millions by two Boer soldiers, who then kill each other through idiotic greed, leaving the Kruger millions hidden in a graveyard in Kuvukiland. Now, in the present, a scrawny businessman named Alvin (Moonsammy) and his Texan engineer partner named Jack (Janks), together with their beautiful guide, Gabrielle (Anstey) are plotting to mine for oil in the pristine land which would leave it an oily mess. Bones and Mathambo must devise a way to outsmart the opinionated Westerners. Of course, as their plan unfolds, so do many other unexpected twists and turns, with hilarious effect.

Mr. Bones 3, Son of Bones was produced in collaboration with M-Net and Film Chrome, with support from the Department of Trade, Industry and Competition and the National Empowerment Fund. The film is locally distributed by Filmfinity Pty (Ltd.) and will be released in South African cinemas in 2022.