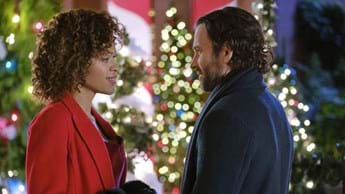 You get the comfort and joy of holiday movies when you Choose Joy with DStv this week.

Lifetime (DStv channel 131) spoils viewers with the ultimate Christmas movie Snowed Inn Christmas which will have you cheering on saving Christmas in a small town.

Universal TV (DStv channel 117) is also known for its Festive Films, and this December they are going all out with Christmas movies Deliver By Christmas and Christmas By Starlight.

Over on Showmax, there’s also some festive fun with Lonestar Christmas and a western thriller called No Man’s Land. And M-Net (DStv channel 101) is bringing us this week’s Bad Santa in the movie Fatman.

The only thing that Jenna Hudson (Bethany Joy Lenz) and Kevin Jenner (Andrew Walker) have in common is that they work for the same online publication in New York City… until they volunteer for a special writing assignment, and a rogue storm strands them in the town of Santa Claus, Indiana, where they rediscover the magic of Christmas.

When bakery owner Molly (Alvina August) meets Josh (Eion Bailey), a widower who recently moved to her town with his young son, her feelings for him become increasingly confused. She’s also falling for a mysterious client – someone she’s never met in person. How long will it take for Molly to realise that they’re the same man?

When her family's diner, The Starlight Café, is slated for demolition, a lawyer named Annie (Kimberley Sustad) makes a deal with the heir to a development firm, William Holt (Paul Campbell), to spare it just before Christmas. But William really does need a lawyer to appease his father after he makes some expensive mistakes.

Chris Cringle’s (Mel Gibson) gift business is slowly going under because modern kids are so rotten. But he’ll need to check his naughty list twice when the U.S. Military comes to him with an offer to build components for a new jet fighter plane, and a spoilt child hires hitman Jonathan Miller (Walton Goggins) to murder Chris.

When a widowed mother takes her daughters to spend Christmas with her estranged dad on his Texas ranch, she unexpectedly falls in love with a local Mexican restaurant owner while learning to forgive her father for the past. Starring Stephanie Bennet, Marco Grazzini, Brent Stait and Colleen Wheeler.

Watch from Tuesday, 7 December on Showmax

Watch from Monday, 6 December on Showmax