Choose Joy with DStv Christmas movies for the whole family

A merry month of movies on DStv this December, from romance in the snow, to sunny South African stories 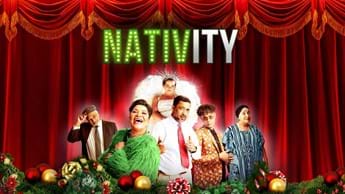 Whether you love Christmas snow and mistletoe or a sunny South African celebration, or even one of those cuckoo Christmas stories about a chaotic family brought together by the holiday spirit, you can Choose Joy with a holiday movie on DStv this December.

The movie stocking is stuffed with fun, funny and romantic movies – it’s the ultimate comfort viewing and just the ticket to help you to start feeling the festive spirit. There will be new movies to enjoy throughout the month but if you’re busy, busy, busy, you can record them for later, when you’re ready to sit down and indulge. Just click on the Set a reminder button and it’ll make a note to remind you just minutes before the film starts.

Don’t miss this year’s brand-new local holiday movies including Nativ(ity), Season’s Feelings, Eve’s Christmas and Asseblief And Dankie. And if you're DStv Compact Plus, Compact, Family or Access, you can ADD Movies to add 3 DStv Premium movie channels to your existing package, so can watch these films on M-Net Movies 1 (DStv channel 104).

PS: You can find many more Christmas movies already waiting for you on DStv Catch Up.

SAFTA-winner Jozua Malherbe teams up with Wonderlus producer Zandré Coetzer for an original holiday comedy that follows a group of outsiders as they travel to a Christmas party. Starring Natalie Robbie, Zandile Lujabe and Kiroshan Naidoo.

Lockdown has hit the South African entertainment industry hard. Theatres are closed, and that means no festive pantomime. Now, a group of theatre friends are coming together to save Christmas from the Coronavirus. But egos are running hot and personal agendas could wreck their good intentions. With Bianca Flanders, Namisa Mdlalose and Dean Balie.

The only thing that Jenna Hudson (Bethany Joy Lenz) and Kevin Jenner (Andrew Walker) have in common is that they work for the same online publication in New York City...until they volunteer for a special writing assignment, and a rogue storm strands them in the town of Santa Claus, Indiana, where they rediscover the magic of Christmas.

A Husband For Christmas

2 graphic designers, Brooke (Vivica A Fox) and Roger (Rico Ross), whose companies have just merged, agree to a marriage of convenience. It allows Brooke to get 1 over on her sister, who’s just announced her engagement to Brooke’s ex. But what started as a lie slowly transforms into true love.

Heart Of The Holidays

When a job transfer falls through leaving her temporarily unemployed, stockbroker Sam (Vanessa Lengies) is forced to return to her family’s home in upstate New York for the Christmas holidays. But staying in town also sets her up to run into her high-school sweetheart, Noah (Corey Sevier), the guy she left behind to chase her career.

A small town’s mayor, Alex (Brooke Nevin) decides to hold a special Christmas market to help local businesses that are under financial pressure thanks to a disruptive construction project. She’ll need everyone’s help, including that of the reclusive mill owner, Darcy (Corey Sevier) and romance sparks when she goes to invite him to the event.

Morning show producer Kelly (Aimee Teegarden) becomes a feature on her own show when her staff find out about her new year’s resolution to accept every social invitation that comes her way for a month. But will handsome Tom Malone (Michael Rady) be 1 of the people she says yes to?

Christmas In The Highlands

American perfume expert Blaire Henderson (Brooke Burfitt) is sent to the remote Scottish Highlands during the Christmas season to get her hands on the formula for a limited edition perfume from an Earl (Dan Jeannotte) while he’s preparing for his annual ball. But she gets a new item on her to-do list: fall in love.

Romantic comedy. Successful Atlanta businesswoman Kenni (Tamela J Mann) has been dodging hometown holidays for years. But when she reunites with an old high school friend, Jessie (David Mann) she’s reminded that her family’s clouds have a silver lining, and there’s something great about being home after all.

Romantic comedy. After having her heart broken, Iris Simpkins (Kate Winslet) swaps houses for the Christmas holidays with Los Angeles-based showbiz lady Amanda Woods (Cameron Diaz), who also wants to escape an ex. The holiday turns out to be especially blessed when it refreshes their spirits and their love lives.

Christmas With The Kranks

Chris Cringle’s (Mel Gibson) gift business is slowly going under because modern kids are so rotten. But he’ll need to check his naughty list twice when the US Military comes to him with an offer to build components for a new jet fighter plane, and a spoiled child hires hit man Jonathan Miller (Walton Goggins) to murder Chris.