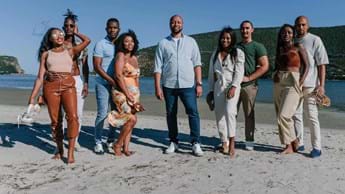 Yesterday Twitter was full of opinions about the couples who bravely put their relationship to the ultimate test of Temptation Island South Africa, as the reality show’s two-part reunion saw #temptationislandsa trending at #1 for four hours straight, before passing the top spot to another Showmax Original, The Wife.

Based on the Banijay-owned hit reality format, Temptation Island South Africa followed four couples at a crossroads in their relationship, where they had to mutually decide if they were ready to commit to one another for the rest of their lives, or go their separate ways.

Together, the couples experienced a luxurious holiday in paradise (aka Knysna), where they lived separately - with 20 sexy single men and women who were looking for love. This last taste of the single life was meant to help answer their most difficult questions about their relationship, like, “Are we meant to be?” and “Is there someone better out there for me?”

Justin and Estelle, and Sifiso and Musa, are engaged

At the reunion, Justin Fritz and Estelle Langa announced that they’d passed the test and are engaged, as did Sifiso Ndlazi and Musa Qubinkomo. But both relationships immediately faced fresh challenges. First one of the singles, Angelique Samuels, alleged that, after the show had ended, she met with Justin at a park and they kissed; and then another single, Dimpho Khoabane, alleged that she kissed Sifiso during Temptation Island South Africa, in the bathroom away from the cameras. Both engaged men denied the allegations.

Nthabi alleges MJ cheated on Bontle with her

MJ Maponya, who initially gave his relationship with Nthabiseng Maphago a 10/10 chance of surviving the show, confirmed that he’s found his someone “better” in Bontle More. But Nthabi then alleged that MJ stalked and harassed her after filming - and cheated on Bontle with her. MJ denied the allegations.

Precious has left Grant, but isn’t with Dain

Watch all the drama, which includes a pushing match between MJ and CeeJay, on Showmax at https://www.showmax.com/eng/tvseries/zxqagjia-temptation-island-south-africa, where you can now binge all 14 episodes.

Watch the trailer for the reunion