’n Woolies Kersfees-Kookstryd Met Minki, Dreams of Gomorrah, Emakhazeni, as well as new episodes of telenovelas Lingashoni and The River. 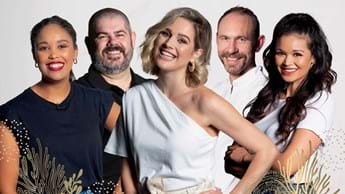 Start December with a smile with DStv’s fresh, fun and fabulous shows that’ll have you loving local TV.

This week’s schedule is packed with local goodies such as ’n Woolies Kersfees-Kookstryd Met Minki, which will get you thinking about your own holiday menus, and local films Dreams of Gomorrah on Showmax, and Emakhazeni on Mzansi Magic (DStv channel 161).

On the local telenovela front, new episodes of Lingashoni and The River will keep viewers glued to the screens as with new drama and scandals, including a dead body, a suspected pregnancy and a visit from the police.

Kick off the silly season with this special food programme with TV personality Minki van der Westhuizen as host. Chefs Nic van Wyk and Yolani Abrahams team up against chef Jacques Erasmus and media personality Zoë Brown as they compete in 3 uniquely themed rounds to determine who can serve the most outstanding meals.

Movie. A young man struggles to juggle being the perfect son as well as partying. He must take over the family business, but will he keep up with his double life? Starring Ikobeng Moathlodi and Seiphemo Motswiri.

In this local feature film, a young woman named Phiwo, who has a strict, religious father, travels to Durban, South-Africa to get married, but she finds herself falling in love with a woman instead.

Watch Dreams of Gomorrah from Thursday, 2 December on Showmax

The drama continues in this local telenovela as Seipati identifies Teboho’s body. Tebatso is nowhere to be found when his family need him the most, Detective Kalipa pays Mdu and Ace a visit and leaves them shaken, and Sarah is sure that Mpumi is pregnant.

An announcement at the Dikana house causes arguments and raises questions in the latest episode of this local telenovela. And after warning Cobra, Mabutho decides to take action.