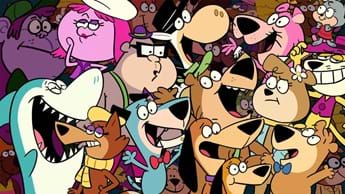 DStv’s School of Laughter is taking children to wonderful places this week.

The brand new series Jellystone! debuts on Cartoon Network (DStv channel 301) and if you’re a cartoon loving parent, so many of its characters, from the picnic loving Yogi Bear to the streetwise Top Cat will bring back happy memories. There are also brand new episodes of your kids’ favourite series including Mickey Mouse Funhouse S1, The Owl House S2, Do You Know S5, and Mily Miss Questions S2.

And there are three brand new movies to enjoy, with a little something for each age group. Older tweens will love the unique perspective in the Disney Channel (DStv channel 303) original movie Spin, while the under-10s can enjoy Riki Rhino on M-Net (DStv channel 101), and the toddler crowd will be entranced by Fireman Sam: Norman Price And The Mystery In The Sky.

The town of Jellystone is a place where all the Hanna-Barbera characters like Yogi Bear Top Cat, Grape Ape and Magilla Gorilla live and work. It has the old-world charm of a small European village with all the latest conveniences of a modern city. Characters stroll around interacting with one another in each of their surreal misadventures.

Everything in the Owl House has changed following S1’s confrontation with Belos. Luz has lost her only way home, her friend the rebellious witch Eda has lost her magic, and the adorable tiny warrior, King, is about to lose his sense of identity. But if they work together, they can reclaim what they lost.

Mickey Mouse Funhouse is a fantastical place where Funny – a magical playhouse, who talks and interacts with Mickey, Minnie, and their pals – take the gang on silly and funny adventures filled with fantasy play and wish fulfilment.

This mischievous theatre troop will take you on a fun and adventurous journey through the daily life of the Middle Ages to explore science, arts, culture and, of course, chivalry too.

In new episodes of this kids’ animated series, Mily learns more about pride and that we can be proud in many different ways. Pride often separates us, but pride can also bring us together.

A sweet, family animation filled with adventure. A young Sumatran rhinoceros named Riki has his horn stolen by a horrible poacher. To get his horn back, Riki embarks on a quest. With the voices of Hamish Daud, Zack Lee, and Ridwan Kamil.

In this live action kids film, Rhea (Avantika Vandanapu) discovers her passion for creating DJ mixes that blend the rich textures of her South Asian culture and the world around her.

Fireman Sam: Norman Price And The Mystery In The Sky

A series of emergencies have Fireman Sam and PC Malcolm raising their eyebrows, as a mysterious Flying Man keeps saving the day just in time. With the voices of Colin McFarlane, Denise van Outen and Sasha Behar.