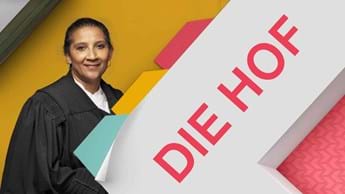 Looking for some local stories? DStv has you covered with original telenovelas, dramas, game shows, reality and movies. Here is what you can look forward to this week.

The drama and scandal gets intense in the local telenovela The River on 1Magic (DStv channel 103), with the introduction of a new character who’s going to make Andile’s life quite complicated, and don’t miss Robbie getting a stylish make-over in Legacy! Remember, if you hate the wait, you can get early access to new episodes of both of these telenovelas a day before when you watch them on Catch Up via the DStv App or on your internet-connected DStv Explora.

And if you love a good makeover, head over to Honey (DStv channel 173) for a brand new season of Room Reno.

And for a special treat, we have local movie Lizz Virrie Lewe, which takes a comical look at a woman who becomes a life coach.

Robbie (André Lotter) has decided to embrace The Price family and accept a job offer at Legacy Investment, and when you work at a fancy firm you must look the part right? So, call in the glam squad, because Robbie is going to get a Legacy-style make-over and oh! – how sexy is Mr Robbie going to look in a designer suit!

A new character named Enzo (Kgosi Molapo), the 3-year-old son of Andile Dikana and Faith Sibiya, makes his appearance and it will cause all sorts of problems for Andile, who is now living as a gay man and had no idea about the child. Enzo arrives when Faith comes to dump him in Andile’s lap after an opportunity presents itself for her to live large in America.

In a brand new season of this budget reno show, two housemates who are frustrated with a shared living space have a chance to fix it. A coin toss will determine which one of them will be given the opportunity to make over the disputed space with the help of a team of experts. The catch? They have just one day for the full reno, and the budget is tight.

Quiz show. Bernie Meyer is back in the Hot Seat tonight. With R10 000 in the bank, he’s about to play Question 7. How much money will Bernie win? Host Rian van Heerden keeps him cool, calm and collected as he ponders which answer is the correct one.

Singer and TV personality Jak de Priester travels to Johannesburg where he sits down with actress Elzabé Zietsman in her guesthouse, Zietsies. A heartfelt conversation happens over a cup of tea, and we learn more about what makes Elzabé tick.

Die Hof is a court reality TV show in which ordinary people can bring their real-life small claims cases to be settled through binding arbitration. It focuses on small claim legal disputes. In new episodes a painter struggles to get an estate agent to pay for extra work done, and a sister battles to get a “thank you” out of her brother.

Fresh from qualifying online, Lizzie is excited to get going as a professional life coach. She feels she was born for this, and is uniquely positioned to coach the masses, bringing healing. Made-for-TV movie with Quanita Adams, and Zenobia Kloppers.