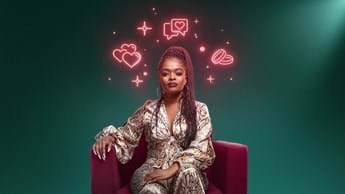 TV has its share of sensational, confrontational reality series. And on the surface, few things could seem more shocking than sitting down a dysfunctional couple at a table with the cheating partner’s lover on the side. But in the hands of series host and presenter Noluthando Nqayi, the aim of Face 2 Face isn’t just views, Tweets and shocked gasps... it’s standing up from the table with your questions answered, and the possibility of healing a relationship, or being reconciled, to letting go.

Now Noluthando tells us how she stays fair, kind and present as a negotiator to give love a chance...

What are some of the more interesting relationship issues the show deals with?

What stuck out to me is that different aspects of abuse were brought up, such as emotional and mental abuse, which seemed to be a common thread. Those are issues that we don’t seem to address as they are seen as less than or not as important.

All of the couples volunteered to appear on the show. But were there couples that needed a bit more convincing to go through with it?

Production had to sit down with the various parties and talk to them about what they wanted and could possibly be achieved, from sitting down and discussing what had gone wrong.

How did you make sure that the show was more about healing than sensationalism?

I think it was important that each party got to actually listen to each other and air the grievances that had brought them to this point. They were taken to a neutral place, without anyone around other than the crew, so they could actually sit and talk. The show was filmed in various locales, close to where the different couples were from but away from wandering eyes and loud noises.

Were there moments where you had to pause production to give the couples time to cool down?

The show deals with a very heavy topic and it affects people differently. We had to try and be sensitive and empathetic towards our guests. If I felt that a person was not dealing with the issues at hand or struggling, I would ask production to stop so that the person could gather themselves and their thoughts.

Did the crew have professional resources available to them to cope with the gravity of the show’s content?

Yes, it was made mandatory that I attend therapy that has been provided by the production, as we were dealing with very heavy matters.

Was there a Face 2 Face moment in your own life?

I would say, my first day of therapy. It has been a journey and I’m still on it. It didn’t just help me with coping with the matters that the couples had raised, but also helped me in dealing with my own personal journey.

What have you learned about conflict resolution while working on the show?

That listening to understand each other is important. A lot of the time we just speak for the sake of speaking and not necessarily communicating with each other and making sure each person is heard and understood.

Were there moments during the show where you felt yourself getting a bit emotional?

Seeing people struggle to be seen by their partners was difficult, as most of us are searching for someone to love and care for us. It’s an everyday struggle. We joke about it a lot when we hear these stories, but that’s also because we identify with that struggle.

These are real people and real lives – what do you want viewers to take from this show?

That these are real issues that have consequences. And that communication is key in relationships. Some of these stories are not new, but it’s how we deal with them. Most importantly, we need to value ourselves as human beings who are worthy.

What did you personally take from this show?

What I’ve taken from the show is that self-love is important.

Mzansi Magic (DStv channel 161) is available exclusively on DStv Premium, Compact Plus and Compact. To upgrade your existing package, click here. Or if you'd like to Get DStv, find a service that suits your needs here.