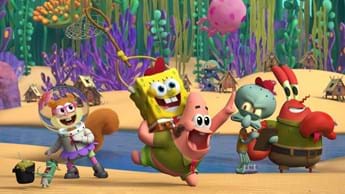 DStv’s school of laughter has something new to teach the little ones every day in this safe haven of fun, play and laughter. This week’s special series and episodes have a little something for every kid, from the animal fanatics to your Lego loving little ninjas.

And on Cartoon Network (DStv channel 301) new adventures await in episodes of Ninjago with three little ninjas who know how to get things done. It’s a kiddie utopia!

All aboard for adventure

The Barkers: Mind The Cats!

Kids will love this fun-filled animation movie in which a dog family goes on a holiday. The youngest of the family, Kid, is eager to play with his other siblings while they are on holiday, but they are too busy with their own hobbies. Luckily for Kid, he finds new friends: cats.

Join SpongeBob and his pals as they spend the summer building underwater campfires, catching wild jellyfish, and swimming in Lake Yuckymuckat in the craziest camp in the kelp forest, Kamp Koral.

In new episodes of this comedy animation series about the cheerful yellow sponge who lives under the sea, Mr Krabs gets ready for his hot date, but SpongeBob and his best friend Patrick, the pink starfish, give him a little more help than he wants or needs.

Tune into new Ninja adventures as Nya, Kai, Jay, Cole, and Krag emerge from the wreckage of the Land Bounty and inspect the carcass of the Ice Dragon, which they discover to be made of elemental ice.

In new episodes of this live action kids show about four gifted children with superpowers, Miles Macklin aka superhero AWOL, starts seeing visions of the future just before they happen, and Captain Man thinks it must be the work of Swellview's leading time-crime villain, The Time Jerker.

In new episodes of this family friendly kid’s show about the Casagrandes family, Ronnie Anne doesn’t believe in an astrological prediction that “love will find her”... until it seems to come true!