A glimpse behind the scenes, a look from an animal’s perspective, and a mission to find the lost empire of Atlantis in DStv’s new factual series this week 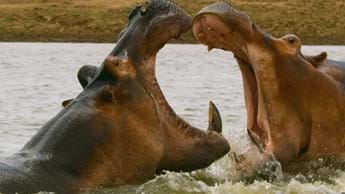 Animal lovers are in for a treat with DStv’s new factual series and specials this week.

Eden: Untamed Planet: The Making Of, gives viewers a new perspective on how the BBC shot the amazing footage of earth’s wonders, and if you’re an animal lover you can see the world in a whole new way in the doccie series Animals With Cameras.

Then in Hunting Atlantis fantasy novelist Stel Pavlou and environmental scientist Jess Phoenix go on an adventure to find clues about the location of the lost city of Atlantis.

Looking for something a little deadlier? Stick around for true crime series A Lie To Die For and Murdertown!

Look how the series was made and find out how wildlife filmmakers from the BBC got those incredible shots in some of the world’s most pristine wilderness, like the San Rafael Glacier in Patagonia. And witness the lengths they went to capture footage of hyenas and jackals preying on seals on Namibia’s Skeleton Coast.

Wildlife cameraman Gordon Buchanan and his team place on-board cameras on creatures like sharks, orcas and turtles, allowing us to see inside their private lives and worlds. We’ll follow along with Tasmanian devils and kangaroos, flying foxes and gannets, through the air, ground and forests, as Gordon and his team of experts explain the behaviour we’re seeing.

Fantasy novelist Stel Pavlou teams up with geologist, explorer and environmental scientist “Volcano” Jess Phoenix to explore locations around the world that are rumoured to be the location of Atlantis. They start their hunt in Bulgaria, where evidence of an ancient catastrophe points to a lost city beneath the Black Sea.

Watch from Saturday, 6 November on Discovery Channel (DStv channel 121) at 20:00

Explore some of Britain’s darkest murder locations. This season host Anita Rani visits Milton Keynes, Wakefield, Wigan, Wishaw, Southampton, Oxford, Lichfield, Leicester, Bath and Whitby on the trail of cases like the murders of Rachel Manning, Wendy Speakes, Zoe Nelson and Louise Sellers. Find out how their killers were eventually found and bought to justice.