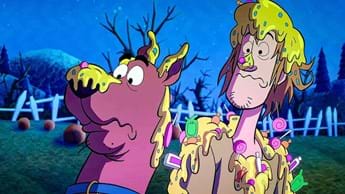 Whether you’re a ghouls and goblins house at this time of year, or just want some sweet, innocent fun for the little ones, DStv’s School Of Laughter has what you’re looking for.

Two special Halloween stunts on Disney Junior (DStv channel 309) and Nickelodeon (DStv channel 305) will keep the kids entertained, and then we also have a Scooby-licious animated movie Happy Halloween Scooby-Doo! over on M-Net (DStv channel 101), which will put the mist in mystery! There’s a mummy on the loose in a small town in Disney’s Under Wraps. And read more about DStv’s Halloween School Of Laughter specials here

Remake of the 1997 Disney classic live action movie of the same name. What would you do if an ancient Egyptian nightmare mummy with glaring eyes started chasing you around a house? 12-year-old horror fan Marshall (Malachai Barton), his best friend Gilbert (Christian J Simon), and the new girl at their school, Amy (Sophia Hammons) go from watching horror movies to living in one.

Animation. Crystal Cove is in danger when a toxic waste leak turns the town’s pumpkin patch into an evil “Jackal-Lanterns”! Scooby and the gang are sent to investigate this mystery and team up with Elvira, Mistress Of The Dark (Cassandra Peterson, voicing herself) and Bill Nye The Science Guy (voicing himself) to solve it.

Animated comedy series about a reformed rain cloud, a shipwrecked sailor turned postman, and a magic walrus, who together form a wacky postal service. They work on remote Mount Middlemost. Featuring the voice talents of Beck Robinson, Colton Dunn, and Johnny Pemberton.

Tune into a new season of this kids’ show about an aspiring hip-hop star Dylan, who gets ready to return to Chicago with his mother, until a change in their plans has him questioning his relationship with his mom and whether it has improved.