Trick or treat? Just kidding, these shows and movies are all treats for the children on DStv this Halloween. 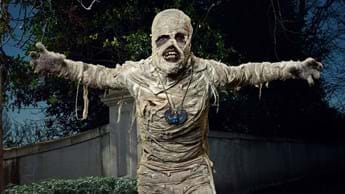 Spooky but not too spooky. Gnarly, but not nightmare fuel. It’s a Spooky Season spectacular on DStv’s School Of Laughter.

From making a new BFF out of an ancient mummy in Disney’s Under Wraps, to a haunted castle adventure with Mickey Mouse and sinister kitchen nibbles with Matilda Ramsay, there’s plenty of treats and no tricks in store for kids of all ages.

So turn off the lights, sit around the eerie glow of the TV and let DStv spin you a story.

Remake of the 1997 Disney classic live action movie of the same name. What would you do if an ancient Egyptian nightmare mummy with glaring eyes started chasing you around a house? 12-year-old horror fan Marshall (Malachai Barton), his best friend Gilbert (Christian J Simon), and the new girl at their school, Amy (Sophia Hammons), quickly go from watching horror movies to living in one.

Mom’s Got A Date With A Vampire

Live action. Grounded siblings Adam (Matt O’Leary) and Chelsea (Laura Vandervoort) hatch a plan to get their mom, Lynette (Caroline Rhea) out the house on Halloween by setting her up on a date with a mysterious man named Dimitri (Charles Shaughnessy), unaware that he’s a friendly vampire.

Ever wanted to swap places with a grown-up? Anna Coleman (Lindsay Lohan) does – and then she wakes up in her mom’s (Jamie Lee Curtis) body! They’ve switched overnight and need to hurry up and figure out how before they’re stuck that way forever!

Everyone gets lonely during the holidays, including Count Dracula. Thanks to a magical wish, he transforms the Wishbone family into monsters and then tries to help them get back to their human forms… while hiding the truth about who he is in this cute animation.

Self-assured teen Luz discovers a magical portal that takes her to a realm filled with all kinds of fun and fascinating creatures and people – like Eda the rebellious friendly witch who’s looking for a new assistant… just like Luz. Catch these special spooky-themed episodes and get ready for S2 starting on Monday, 15 November.

Looking for loads of wholesome shows all with hauntingly sweet Halloween-themed episodes? Edu-tainment channel Da Vinci has them lined up…

Disney Junior (DStv channel 309) has a line-up full of Halloween treats for your little kids, too, on Sunday 31 October. It’s good, silly fun with scares that won’t give them a sleepless night. including…

10:30: Chicken Squad. Coop referees a contest when Sweetie and Little Boo both want to dress as a T-Rex dinosaur for Halloween. Then the Squad must help their critter friends track down a mischievous ghost.

11:00 221B Barker Street. When treats go missing from the Halloween party, wannabe sleuths Bingo and Rolly set off to solve the mystery.

12:00 Mickey Mouse: The Tale of Two Witches. On Halloween, Mickey tells the story of 2 witches-in-training – Minnie Mouse and Daisy Duck – who must pass 4 tests to graduate from the Witch Academy in Happy Haunt Hills.

Download the DStv app, a free service for all DStv subscribers. With the DStv app, the same channels you watch on your decoder at home are available for you to stream online or on your mobile device.