Home is where the heart is with reality and lifestyle series on DStv Access this November. Stay connected to DStv Access to check it out. 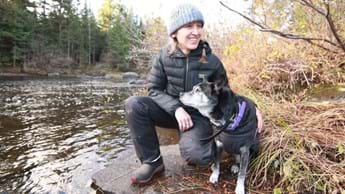 November is all about creativity, adventure and the pleasures of home on DStv Access.

One of the most exciting and endearing shows for the month is National Geographic Wild’s (DStv channel 182) reality series Called To The Wild, which sees dog and human partnerships compete in wilderness challenges. And there’s more ego at stake when cake masters Buddy Valastro and Duff Goldman go into their tiebreaker competition season in Buddy Vs Duff.

If you’re looking for reality shows about intriguing people and strange lives, there are new seasons of 1000 LB Sisters, The Family Chantel, and Borderforce USA The Bridges.

But the main attraction this November is an extravaganza of home renovation, property and design series on DStv Access. Look out for Million Pound Properties, Making It Home With Kortney And Dave, George Clarke's Old House New Home and more. And cooking and craft fans, there’s something special for you, too in Wok vs Pot and Kirstie's House Of Crafts.

Then if you need a break from all that home improvement, there’s also a celebration of both love and friendship in the brand-new telenovela, 100 Days To Fall In Love.

Stay connected for all this and more, this November on DStv Access...

Called To The Wild S1

In each episode of this adventure reality series, three new dog-and-human partnerships (including a champion Iditarod racing duo) compete to prove that they can thrive in the wild for at least 10 days, while carrying out a series of challenges that will test their ingenuity, teamwork and endurance.

Cake Boss vs Ace Of Cakes, the battle continues! Buddy Valastro and Duff Goldman try to out-do each other, starting with safari themed cakes and then moving on to the ancient world, a re-match of the car concept cakes, and cakes that look like other food. With 1 win each, this season is the tiebreaker!

Tammy, Amy and their brother Chris continue their weight loss journey on the path to all of them being able to survive bariatric surgery. This season the pressures of being a new mom combined with having to look after Tammy, who resents her deeply, pushes the limits of Amy’s patience.

Now that the family is back in Atlanta after attending Royal and Angenette's wedding in the Philippines in this 90 Day Fiancé spinoff, Chantel and Karen struggle to deal with older brother Royal’s decision to distance himself from the family. And a boob job could be the last straw between Nicole and Alejandro.

On the United States side of the US-Mexico border, Customs and Border Protection officers stationed at 12 of the 28 bridges that span the border have to catch everything from human traffickers and gun runners to money launderers and drug smugglers, all bound for the US market.

Find out what the same amount of money will buy you across the UK – from Scottish castles to central London mouseholes, to rundown council houses or even a lighthouse – during one of the most volatile housing markets in history. The series will also reveal what you can buy when money is no object.

Making It Home With Kortney And Dave S1

Kortney and Dave Wilson (of Masters Of Flip) help homeowners to transform nightmare houses into dream homes. Using their flipping experience with over 150 properties, they’ll help the owners to spend strategically as Kortney leads on design decisions and Dave takes charge of project management.

Designer Nikki Chu helps fans who’ve reached out to her with design dilemmas while also taking care of projects for her celebrity friends (like Tisha Campbell). In each episode she’ll present someone with 2 boxes filled with inspirational items. Based on the one they choose, she’ll then make all design decisions about their space.

Home Of The Year S4

21 sets of homeowners from around Ireland compete against one another to see who has come up with the most exciting design solutions for their spaces, with 3 new spaces being featured each week. The judges are designer Hugh Wallace, interior designer Deirdre Whelan and architect Patrick Bradley.

George Clarke shows home reno fanatics how to create modern interiors without losing a house’s period charm. In each episode he makes over two wildly different properties from the same era to show how to work around planning restrictions, previous bungled makeovers, and the nature of the house itself.

I Escaped To The Country S4

Homeowners who left their slick city lives behind to move to (and mostly retire to) the country in the Escape To The Country series show us how they’ve adapted to their new lives and hobbies. This season’s Escapees include a Suffolk man who now works as a wildlife conservation volunteer.

Hosts Silvia Colloca and Marion Grasby swap ideas, inspirations and cultures as they cook side-by-side in the kitchen. In each episode, Silvia dishes out her Italian classics while Marion re-creates her Asian and Thai favourites. The two also discuss family recipes for weekday dinners and desserts.

Kirstie Allsopp shows us how to use ordinary items found in our homes to make everything from fabric flowers and leaves to winter wonderlands and weaving. She’ll also ask fellow crafters to show off the things they’ve made during lockdown, and to share crafty hints and tips with viewers.

Telenovela with a romantic comedy twist. Constanza (Ilse Salas), a successful and sophisticated lawyer, mother and wife is lifelong best friends with free-spirited Remedios (Mariana Treviño), a loving mother and wife who’s a bit of a disaster, really. The 2 lean on each other when their marriages fall apart at the same time.