The best international movies to watch on Showmax in October 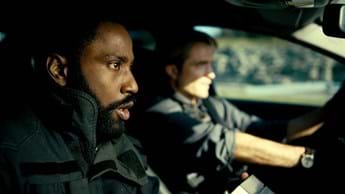 The fifth biggest box office hit globally of 2020, Tenet won the 2021 Oscar and BAFTA for Best Achievement in Visual Effects, with a further Oscar nomination for Production Design.

Directed by five-time Oscar nominee Christopher Nolan (Inception, The Dark Knight Trilogy), the sci-fi action thriller follows Protagonist. Armed with only one word, “Tenet”, he journeys through a twilight world of international espionage on a mission that will unfold in something beyond real time. Not time travel: inversion…

The 10th biggest movie of 2020, with a worldwide gross of $215 million, DreamWorks Animation’s “Croodaceous” adventure The Croods: A New Age follows the prehistoric Croods pack as they try keep up with their new, more evolved neighbours, the Bettermans.

Nominated for a 2021 Golden Globe Award for Best Motion Picture, six Annie Awards and two Kids’ Choice Awards, The Croods: A New Age is a “raucous, nakedly commercial but also wickedly funny sequel”, according to The Times (UK), while Empire Magazine praises its “vibrant animation and a wackadoodle sense of humour.”

Also catch the Oscar-nominated original film The Croods on Showmax.

Winner of both the Special Jury Prize and the Audience Award at SXSW, Saint Frances follows a deadbeat nanny who finds an unlikely friendship with the six-year-old girl she’s charged with protecting.

Saint Frances has a 99% critics rating on Rotten Tomatoes, who named it their second best-reviewed comedy of 2020. As Rolling Stone says, “What looks like a throwaway about a precocious kid and her nanny is actually one of the best and gutsiest movies you'll find anywhere these pandemic days - a fun-time trailblazer that retains its rough edges to that last. It's some kind of miracle.”

The film has won 11 international awards, with The National Board of Review naming it one of the Top 10 Independent Films of 2021.

In the girl buddy road trip comedy drama Unpregnant, 17-year old Veronica’s dreams for the future hang in the balance after she accidentally falls pregnant. Unable to get an abortion in her home state of Missouri, she turns to her former best friend Bailey to help her get to Albuquerque.

Nominated for a 2021 GLAAD Media Award and a Gold Derby Award for Outstanding TV Movie, Unpregnant has a 91% critics rating on Rotten Tomatoes, where the critics consensus says, “Unpregnant puts a compelling twist on the road trip comedy -- and treats its sensitive subject with heart.”

“Made with great panache, this is a real gem of understated poignancy... about summers as lovely as they are fraught,” says Globe and Mail, while Empire Magazine says, “Arterton triumphs again and Swale marks herself as a director to watch. Summerland successfully combines an intelligent feminist fable and a lesbian love story with a slick period tearjerker.”

Did you know that if you’re a DStv subscriber, you pay even less (or nothing at all!) for Showmax? DStv Premium subscribers get Showmax for free while DStv Compact and Compact Plus subscribers only pay R49 for Showmax.