The reinvented season of the popular celebrity interview show also returns with a fresh new look and format. 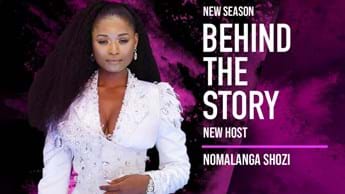 Pearl Thusi has handed over the reins of popular celebrity interview show Behind the Story to one of Msanzi’s favourite female personalities and VCNA Culture Squad member, Nomalanga “The Flame” Shozi. The influencer will lead the brand new, reinvented season which also sports a fresh new look and format.

Nomalanga "The Flame" Shozi is a favourite in the BET family who rose to stardom when she was announced as the first host for BET Breaks Africa and presenter for the black excellence channel in 2018. Nomalanga has represented Africa at several BET international tentpoles from the BET Awards, BET Soul Train Awards to the BET Hip Hop awards where she got to rub shoulders and interview international stars from Erykah Badu, Angela Basset, Common and more. Nomalanga wears many hats from radio host, actress and TV presenter and has graced our TV screens on daily dramas such as BET Africa’s original ISONO and MTV Shuga.

“Congratulations to Nomalanga on her expanded role as the new host of Behind The Story, we are proud to spotlight and elevate black girl magic on the continent through BET Africa platforms.” said Monde Twala, SVP and GM for ViacomCBS Networks Africa and Peer Lead, BET International.

"We must also acknowledge Pearl Thusi, who has been an amazing pioneer and contributor with BET Africa over the years. It has been an honour and great privilege to share in this journey with Pearl as host and producer for four successful seasons. Both Pearl and Nomalanga are trailblazers and champions of black culture and excellence, we wish them the greatest success in their exciting next chapters.” added Twala.

As a key talent for ViacomCBS Networks Africa, Pearl Thusi continues working with the network on other content initiatives and is a key partner for landing the African narrative to audiences across the continent and the world.

Behind The Story S5 takes audiences on a bold, intriguing and fun adventure filled with the eclectic tastes and sounds of the dynamic city of Jozi. Nomalanga "The Flame" Shozi picks up local celebrity guests for an intimate drive where they visit and explore memorable significant locations and venues together during the interview.

From the buzzing Kasi at Vilakazi Street to the pulsating energy of Maboneng precinct audiences will be treated to a visual feast and personal celebrity guest reveal as they share nostalgic insights into how and where they got their first big break, first house, met their loved ones and more never before revealed stories.

Behind the Story host Nomalanga commented, ”I am super excited to challenge myself in this next step of my journey as a seasoned presenter in the industry. This platform that BET Africa has empowered me with is going to give our viewers a different side of me. You have never seen Nomalanga like this before. Mama Pantha, I'm grateful for your legacy and I'll keep the fire burning.”