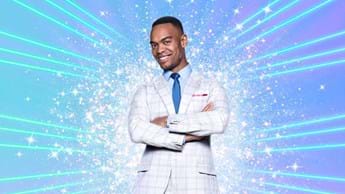 Johannes wowed Strictly fans back in 2018 and 2019 when he and fellow pro Graziano Di Prima teamed up for pair dances. But this year Johannes is out to win with his celebrity dance partner, former winner of The Great British Bake Off S3, John Whaite.

We spoke to Johannes before he even knew that he’d be paired with John, and it’s been wonderful to see his biggest wish for the season come true. Read on as he talks about what it would mean to him to be able to dance with a man, how he prepared for the season, and more...

How was preparation for Strictly this year different from last year?
Johannes: Last year there was a lot of restraint due to COVID, we were completely cut out of the world. This year, there's a lot more freedom. There'll be a little bit of flexibility and the contestants will be able to go back to their families for that moral support, which I think is so important during this journey.

How did you start preparing for the season?
Johannes: I brought my physiotherapist on board, and we devised a three-month plan where I went to gym, I looked at my nutrition and I see him twice a week, just for him to assess everything that I do, and to make sure that the body is still intact after this high-energy, intense work.

What were you doing in the off-season?
Johannes: I get to do other types of work outside Strictly Come Dancing, and that builds Johannes. I've just done Celebrity MasterChef. I've just choreographed a movie, which was absolutely a dream come true, and I've done a few spin-off shows for the BBC. I’ve really been trying to establish myself and calling the United Kingdom home. That has been the hardest thing to do to accept, because all my family's back home in South Africa.

There are quite a few South Africans on Strictly now. Is there something in the water?
Johannes: It’s because South Africans are honestly gifted in everything they do. Our work ethic is incredible. We have talented people living in South Africa, whether black, green, silver, white or gold. We always deliver. But opportunities don't come around often to us. We are so, so, so brilliant, it’s just that we are too far from everything (geographically).

Now, you paid Strictly’s new South African dancer Cameron Lombard a visit?
Johannes: Cameron is a young man. He's only 20. I've had the opportunity to travel around the world since the age of 21, and it's hard having to come to a different country where you don't know anybody. You don't know where the shops are, you don't know where to take your laundry to. So it was my intention to give him a tour, because he lives around the corner from me. I would just want to make sure that he's got a hot meal, and he knows his way around where he is, and just knows that if he needs anything, he can pop in.

Which dance number are you most excited for this season?
Johannes: They (Strictly) are having a same sex couple this season, and I wish that I'm considered for that part because it will be for a male contestant joining the show. When I look at being a part of it, it's just beautiful. I'm glad that we are still pushing boundaries in that regard. But in terms of group numbers, we've done something special, and I can't wait to share it with you! It's progressive. It's thought provoking. It speaks to the heart, and I think a lot of people are gonna watch it and realise that we live in a progressive society. It's 2021, things have moved along, and people should be more compassionate. It’s just brilliant to be a part of a show that sees people for who they are.

What excited you when they announced the celebrities for the season?
Johannes: Onethat stuck out to me obviously was John Whaite. That would be interesting. It's such a moment for my community, as a gay man. And there’s Judi Love, who I think is hilarious. I would want to be in the same room with her every single day, because I think we'll just have a laugh. There's Nina, who's also a comedian, who I've worked with in the past. She's just a phenomenal individual. But they all seem very kind.

What would it mean for you, partnering with John?
Johannes: It would be exciting, the possibility of what it could be, because I don't think anybody knows what it’s (a male-male dance partnership) is supposed to be! That excites me as a professional dancer. According to the traditionalist, to have me lead and him to follow or lead me, that kind of thing is really interesting. And to also just work with the same energy and power. That’s going to be interesting because I'm used to dancing with ladies. This one will also be interesting in that regard, it will be beautiful and powerful.

What was it like going onstage with Graziano as your partner for a dance last season?
Johannes: I knew it was important for my community, for people to look at the show and feel like they're also a part of it in some way. I knew that it would resonate with a lot of people, I just didn't expect it on that scale. A lot of people turned around and said, “This is so important, and good on Strictly and good on you boys for having the courage to do it.” That was nice. A lot of people just see the beauty in it.

What songs would really like to dance to in the 2021 season?
Johannes: Elton John and Dua Lipa just did a remake of a few of Elton’s songs and I'm loving the old coming together with the young and having that collab. Or Anne-Marie, she's a UK based lady and she is phenomenal. It would be a dream to have on Strictly while she's performing and I'm dancing. Vincint (Vincint Cannady, who sings the new Queer Eye theme song) from America who I think is a queer artist. It speaks to our type of dance, which is traditional ballroom and Latin. We can do a cha cha cha to it.

What’s your favourite Strictly wardrobe piece?
Johannes: That Priscilla costume (from 2020’s opening performance) was the most wonderful construction you've ever seen. The team outdid themselves. It was not only a bodysuit covered in crystals and whatnot, there was a reveal to it and everything. They’ve done an excellent job. They're here in my cupboard! I asked them for it!

And what are you loving this season?
Johannes: Every single piece of costume that we’ve had on for the group numbers was outstanding. Absolutely incredible. And we were bubbled up with a wardrobe team at the hotel, so when you left the rehearsals, you went in for fittings. And you checked whether things were sitting properly and felt comfortable. So in that regard, you must see the construction, the beauty, the crystals and the diamonds. They really just know how!

BBC Brit (DStv channel 120) is available on DStv Premium, Compact Plus and Compact. To upgrade your existing package, click here. Or if you'd like to Get DStv, find a service that suits your needs here.

Cameron Lombard tells us what it’s like to step into the Strictly Come Dancing world for the first time.