What to Watch on DStv Compact in October Highlights | Series & movies

Stories worth telling on DStv Compact this October 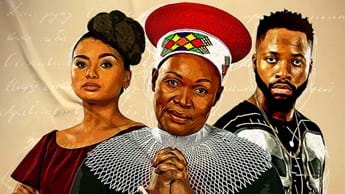 DStv Compact is jam-packed with stories worth telling this October.

The highly relatable local comedy series Black Tax returns, and new local shows – Umkhokha and Grootboom & Sons – will prove that there’s no drama like family drama! On the international front it’s all about friendship and ambition as Tyler Perry’s Sistas returns along with Games People Play. And detective Baptiste is back on the case, too.

At the movies, it’s Shocktober on Lifetime (DStv channel 131) and that means scary movies every Saturday and Sunday at 19:20 like the brand-new Killer In The Guest House, with a special all-weekend Spookathon on 30 and 31 October. Lifetime will also be airing the third in their series of royal movies, Harry & Meghan 3: Escaping The Palace.

Local movie lovers, keep an eye out for the 7 Deadly Sins series of movies on BET (DStv channel 129), and seven is action fans’ lucky number, too, because Tsui Hark’s Seven Swords is coming to KIX (DStv channel 114).

All this and much more on DStv Compact, this October.

This new Sunday night thriller series about power and betrayal tells the tale of two families at war following the death of a patriarch and the fierce competition to take over his church. With Sthandiwe Kgoroge as the dead man’s scheming widow, and a cast of stars including Nay Maps, Linda Sokhulu, Deli Malinga and Sibonile Ngubane.

Single mom and estate agent Thuli (Jo-Anne Reyneke) is back – carrying the extended family on her back financially. This season, Thuli’s headed for night school to boost her career. And new performers join the cast including Owen Sejake as neighbour Bra Hugo and Motlatsi Mafatshe as Hugo’s son and Thuli’s potential love, Nkanyiso.

This drama set in a family funeral home sees one woman on her deathbed expecting her sons to take over, while her estranged sister has selfish plans. But what if the fate of a family business was left in the hands of the wrong sibling? Stars include Zandile Msutwana, Bongile Mantsai, and Charmaine Mtinta.

Tyler Perry’s comedy series explores the lives of single black women from all walks of life, whose bonds of friendship keep them together. The action picks up directly after the events of the mid-season finale, with Andi breaking their engagement after walking in on Gary’s sex therapy session and kissing Robin.

Drama series based on Angela Burt-Murray’s 2014 novel, Games Divas Play. From a basketball wife to a journalist, to a groupie who wants to be a star, everyone’s trying to make it in LA. Claws star Karrueche Tran joins the cast as the LA Vipers owner’s daughter, Eden Lazlo, while Nia investigates a secret society.

Crime drama. In the case for this season, Detective Julien Baptiste travels to Hungary to help the British Ambassador Emma Chambers (Fiona Shaw), whose sons have gone missing in a sinister kidnapping following the murder of her husband. Baptiste soon uncovers a chilling link to terrorism, racist politics and anti-immigrant extremists.

The third in Lifetime’s movie series about Prince Harry (Jordan Dean) and Meghan Markle (Sydney Morton). This film plays out the palace drama in the run up to Harry and Meghan’s final split from the monarchy, move to the US and their interview with Oprah Winfrey.

Killer In The Guest House

Struggling photographer Gina (Chelsea Hobbs) rents out her guest house to help make ends meet. But her new tenant, Mark (Marcus Rosner), the pilot and single dad who seems to be the solution to all her problems, turns out to be the bringer of a whole new set of potentially deadly problems.

After Sandra’s (Barbie Castro) son dies in a motorbike accident, she goes to his apartment to sort out his affairs, where she meets his supposed girlfriend, Krystal Kellers (Kate Mansi). But Krystal’s claims about the relationship don’t match up to what Sandra read in the emails that her son sent her.

When Anna (Sierra Wooldridge) is released from jail, her friend Elle (Jessica Sipos) gives her a place to stay. But Elle’s generosity is a mask for her plot to use Anna to help her get revenge on her stepfather David (Linden Ashby), the man she blames for her late mom’s suicide.

BET Africa and the KZN Film Commission (KZNFC) have joined hands to raise up a new local filmmaking talent. This series of short films, made by seven different KZN-based production companies, centres on the theme of the seven deadly sins. See KZN as you’ve never seen it before, and meet tomorrow’s stars on screen.