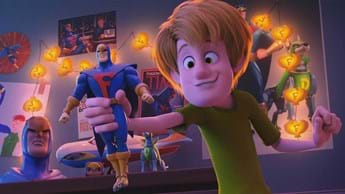 Whether your kids are at the stage where their shows are pure “aww” or pure anarchy, they’re all welcome to take a seat in DStv’s School of Laughter.

The Scooby-Doo and The Mystery Machine gang get a reboot for a new generation in the animated film Scoob!, which airs this week in M-Net’s (DStv channel 101) Saturday kids’ blockbuster slot.

And little kids can learn some social and problem-solving skills along with The Chicken Squad and all-new episodes of Bluey, while older kids can enjoy the rapid-fire jokes and craziness of new Ninja Express episodes.

For the bigger kids

Live action adventure. Five kids are onboard a spacecraft meant to intercept a mysterious asteroid in space when it accidentally launches. Now, despite the malfunctioning onboard AI Matilda (voiced by Paige Howard), they must work together to find their way back home.

In this animated reboot of the Scooby-Doo franchise, investigative team Mystery Incorporated gets together for the first time and sets about unmasking villains who’re trying to spook people by faking supernatural phenomena. With the voices of Jason Isaacs, Tracy Morgan and Simon Cowell.

Three little Ninjas run a delivery service that delivers anything, anywhere and anytime. In new episodes, two sisters arguing over tidying up their house end up with a bigger problem when the Ninjas deliver two cleaning robots from the future who are planning a robotic rebellion.

For the little ones

Animated kids’ “police procedural” series centred on three excitable rookie cop chick siblings and their boss, a veteran police dog, who solve neighbourhood crimes and help creatures in trouble. In their first episode, they help a stranded dog. No problem (or chick) is too small!

In new episodes of this animation with Bluey – a Blue Heeler puppy who goes on adventure with her sister, Bingo – they must save their dad after Bandit gets stuck on the one side of the seesaw. Bluey and Bingo get the entire playground to help them flip dad over.