Set a reminder for these specials coming to the School of Laughter this September. Watch them all on DStv. 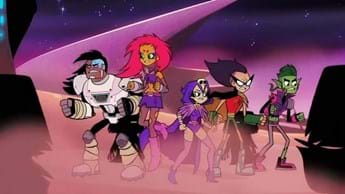 Four-episode Teen Titans-DC Super Hero Girls crossover special. The heroes are given a free holiday in a high tech house that’s floating through space to a mysterious destination. They must dodge a meat meteorite, and disaster when Beast Boy becomes obsessed with Green Lantern’s ring.

Kids’ animation. In these special fast-moving episodes, the pups compete in a race and an obstacle course, stop some cheating in a mayoral race, save a snowboarding competition, race to stop an out of control minecart and careening book mobile, and more.

Kids’ shows take time out! The Teenage Mutant Ninja Turtles fall under the control of a parasitic wasp, the Fairly OddParents are on a fake spy mission, Horrid Henry saves a cat, Dorg Van Dango gets a job, and the Chipmunks and Chipettes have to make peace.

Special episodes about embracing your roots and family. The Rabbids go back to prehistoric times, Myticons focuses on the connection between twin sisters and mothers and daughters, Chop Chop Ninja’s Neeko goes on an adventure with his niece, Timmy and Chloe’s parents go camping together in The Fairly OddParents’, and more.

It’s all Batman, all day on Cartoon Network, with TV Knight episodes followed by Lego Batman: The Movie from DC Superheroes Unite.

Since the days of ancient Japan, humans have been able to harness Symbol Power to become Samurai Power Rangers. Now, Nighlok leader Master Xandred has risen again and Jayden Shiba assembles the 18th-generation of Samurai Power Rangers, including a Gold Ranger, to defeat him.

September weekends are special for tiny kids who can enjoy 3 episodes of Harry & His Bucket Full of Dinosaurs, followed by 3 episodes of Kipper each Saturday and Sunday throughout the month.

Between 08:04 and 09:10 daily in September, little kids get 2 back-to-back episodes of Fireman, followed by 2 episodes of Daisy & Ollie, and 2 episodes of Berry and Dolly. It’s perfect to keep the tinies entertained while the rest of the family are rushing about.

Hunter Street from Monday, 6 September on Nickelodeon (DStv channel 305) at 18:30