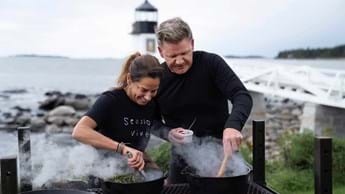 DStv Family is a thrill ride in September.

Legal drama Diggstown is back reminding us that we can chase our dreams, while reality shows Gordon Ramsay Uncharted, Destination Fear and Storm Rising take us on pulse-pounding journeys in dangerous places.

Go all out with DStv Family!

Former corporate lawyer-turned- legal aid lawyer Marcie Diggs (Vinessa Antoine) starts the season with a tricky case involving a fired cop who killed someone with their car. We’ll also see 1 of her S1 clients return, this time on a murder charge!

Adventure chef Gordon Ramsay forages his way across the world, catching rattlesnakes in Texas, rappelling for shrimp in Puerto Rico, wrestling with conga eels in Croatia, scaling cliffs for butterworms in Mexico, and even baking bread in Iceland’s volcanic sands.

Watch from Wednesday, 8 September on National Geographic (DStv channel 181) at 21:00

Dr. Reed Timmer and weather specialist Mike Theiss risk their lives to collect critical data from the heart of storms in an effort to create a real picture of how recent climate change is driving extreme weather systems.

Each episode, Don (host of Mysteries At The Museum) introduces us to 3 stories of the unpleasant or paranormal from around the world, including the tale of a Southern California man who was meant to bring water to a desert city, but left a valley flooded with corpses.

Brother and sister Dakota and Chelsea Laden, their best friend, Tanner, and camera operator, Alex Schroeder, are back on the road confronting their fears in the most haunted locations across the US including Nopeming Sanatorium in Duluth, Minnesota.