Wetsuits & lawsuits in Diggstown on DStv 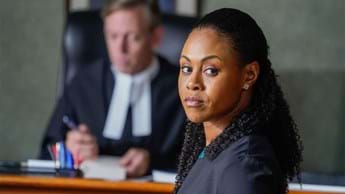 Now she’s determined to work for justice and serve her home community through the Halifax Legal Aid firm. And when the pressure is on, Marcie lets off steam by going surfing.

DStvaskedspoke to Vinessa about the role.

What was a key thing that the series writer and creator Floyd Kane told you about Marcie?
Vinessa: She is a caring and kind person, and I think that speaks to her Canadian background. She is someone that I had not seen in terms of black women on television in this role before, but as a black woman I related to her right away.

How did you prepare for the role?
Vinessa: In the beginning I did a little bit of research, I went to a lot of court cases, I spoke to some lawyers. The creator of our show (Floyd) is, in fact, a lawyer, so I did a lot of following and asking questions and then from there I just ran with it. (She had to learn to surf, too!)

At the start of the series, what sort of picture does Marcie have built in her head of what working in a legal aid office will be like?
Vinessa: Oh, it’s funny because I think in the beginning she was so used to being in a corporate environment and even having an assistant help her, having a big fancy office. I think she understands that she’s taking a huge cut not only in pay but also in how she’s going to be conducting her day. You’ll see in S1 she doesn’t even really have an office yet , they’ve put her in a storage room and she’s a little taken back by it, but she swallows her pride and realises that this is what she has to do, and she just deals with it.

How does working in legal aid allow Marcie to be truly herself?
Vinessa: I think that’s really it, it's about caring about what you’re doing and that’s her journey in S1 – she has to ask herself why she is here, why she became a lawyer. And that’s what happens when she decides to go back to legal aid.

Since her aunt’s death, what is Marcie struggling with?
Vinessa: She struggles with the reality of the justice and legal system. She’s used to winning every case, she’s used to being able to use her intelligence and her education to get what she wants. And when she gets to legal aid, she gets these cases that she’s not normally taken on – for instance a single mother who has a learning disorder and is in jeopardy of losing her child – and she feels helpless when she loses that case.

How did your first surfing scene go in front of the camera?
Vinessa: It was great, I'd been surfing even before we got to camera for weeks and I was exhausted. There were a couple of takes, so it’s quite exhausting because we always have to start at the beginning.

What’s the feedback that you have gotten from the black communities around Nova Scotia on seeing Marcie in the water?
Vinessa: Oh it’s been wonderful. Unfortunately black and brown people have not felt welcome in the ocean, so I wanted to build a community so that young boys and girls could have access to surfing. I was not able to do that by myself because I had to do so much more work on the show, but I did contact and make connections with the community and they spawned a surfing group. They have been going strong for about four years now, and there’s just these beautiful black and brown kids in the water learning to surf and I am so proud of that.

Who’s Who at Halifax Legal Aid

31-year-old Marcie Diggs (played by Vinessa Antoine) is a corporate lawyer who’s new to Halifax Legal Aid but determined to help people who unjustly find themselves on the wrong side of the law.

Colleen MacDonnell (played by Natasha Henstridge) is the ambitious, no-nonsense director of Halifax Legal Aid with a knack for political manoeuvring.

Cynical and abrasive legal aid lawyer Reggie Thompson (played by C. David Johnson) has been in practice for longer than Marcie’s been alive. He has a nose for making deals to keep his clients out of court.

Trust fund baby turned Lawyer Pam MacLean (played by Stacey Farber) loves a good argument and she’s not afraid to use her privileged background to get ahead in her ambition to be a judge.

Lawyer Doug Paul (played by Brandon Oakes) specialises in family law. He has 3 ex-wives and 7 kids, and while he works to help his Mi’kmaq First Nations community from Eskasoni Reserve, a murder case has put him at odds with them.

Halifax Legal Aid receptionist Shailene Garnett (played by Shailene Garnett) has a no-nonsense attitude tempered with empathy, which has been a bit hit or miss with clients.

Universal TV (DStv channel 117) is available on DStv Premium, Compact Plus, Compact and Family. To get DStv, click here.