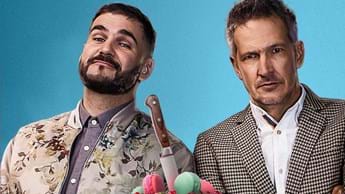 Bon appetit, local reality lovers! My Kitchen Rules South Africa is back on Sundays with a brand-new season to count us down to Heritage Day on Friday, 24 September.

Prepare for the most cutthroat season of Survivor ever because the show’s producers spent that lockdown break sharpening their minds and their knives.

If home is where your heart is, you’ll love the creativity and inspiration of the brand-new season of design reality series The Block Australia. And there’s more life change inspiration ahead in 21 Day Body Turnaround With Michael Mosley.

Then there’s the peace and wonder of Eden: Untamed Planet, the new nature documentary from the Blue Planet and Planet Earth team. And the gripping investigative engineering programme Estonia dives into the truth about a deadly historical ferry sinking.

Judges and foodies J’Something and David Higgs host a special pandemic season of this cooking competition show that’ll see 10 pairs of enthusiastic home cooks taking on challenges in the MKR kitchen, and prepare 3-course meals for their pop-up restaurant spaces in the special MKR event building rather than in their own homes.

Sizzling hot off US screens, this fresh new season of the reality series filmed on Fiji Mamanuca islands between April and May 2021. There’s a dangerous new game afoot, and according to host Jeff Probst, “Survivor 41 is like the monster in a horror movie, and if you’re a player, it’s coming for you.”

This season’s designers filmed in the midst of the pandemic, which disrupted supply chains and led to a long mid-season production break. They’ll be making over 5 old, pre-fabricated houses, each from a different decade between 1910 and 1950, which have been moved to a vacant lot in the Brighton suburb of Melbourne.

Dr. Michael Mosley has just 21 days to turn 5 volunteers’ health around and reverse the effects of lifestyle diseases that are creeping up on them, like type 2 diabetes, high blood pressure and chronic inflammation. They’ll enter a high-intensity training plan, starting and ending with a set of health tests.

Travel to some of Earth’s remaining wilderness areas – from Borneo’s sacred forest, to Namibia’s Skeleton Coast, the Emerald Valley of Luangwa, the Galapagos islands, Patagonia and Alaska – to see these unique ecosystems work. From the Blue Planet and Planet Earth team at the BBC Studios Natural History Unit. Narrated by Helena Bonham Carter.

On the 28th of September 1994, the MS Estonia ferry sank during a crossing of the Baltic Sea en route from Tallinn to Stockholm, killing 852 of the 989 people onboard. Witnesses tell their stories, and a new joint Swedish-Estonian diving expedition surveys the wreck site looking for answers.