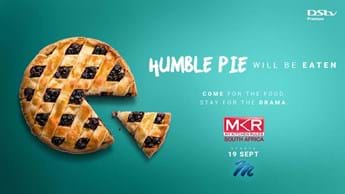 Starting Saturday, 7 August, the My Kitchen Rules South Africa (MKRSA) team were back in the studio and filming the brand-new third season of this competition packed with local flavour – perfect for its release on M-Net (DStv channel 101) in Heritage Month this September

Series hosts David Higgs and J Something are back, too. J posted on his Instagram, “I can’t even BEGIN to tell you how excited I am! I think this show is going to bring so much more than entertainment and drama. I hope it brings people together in their homes and using the gift that is food and friendship, we are able to give many South Africans a reason to laugh, smile, and cook!”

As we’ll see when the season launches, some things might be a little different this year. But when we hooked up with J and David online for a little cooking session earlier, it was clear that the dynamic between the 2 was filled with laughter and camaraderie, and they were both keen as mustard to get back in the MKRSA kitchen. And cheers to that – with a lemon meringue pie cocktail (don’t ask)…

With the COVID-19 pandemic still in effect, this year’s shoot will be a little different. The cast and crew have entered a production bubble together. And aside from the MKRSA Kitchen Headquarters where they will take part in the Challenge Knock-Out Competition rounds, the cooking teams, who’re from around the country, will share another special “home space”.

One of the great pleasures of a season of MKRSA has been seeing the cooking pairs set up their Instant Restaurant in their own homes to play host to J’Something and David and the rest of the contestants with a lavish 3-course meal. It’s been our window into not only their individual taste and creativity, but how hospitality is expressed across South African cultures.

In 2021, we’ll still see the teams set up their Instant Restaurants, but this time they’ll all be hosting from within the same MKRSA studio space in Johannesburg. We’re intrigued to see how each team will make the space their own.

Chef David is a kitchen pro with a dry sense of humour and a passion for beautiful presentation to match beautiful flavours. He is one of the founding partners of the restaurants Marble and Saint with his business partner, Gary Kyriacou. David has been cooking professionally for 20 years, but got his first training in his childhood kitchen, where he learnt the arts of the Sunday roast, koeksister dipping and the good old braai. He has run his own cooking school as well as his own catering company, he recently published his first book titled Mile 8, and he’s one of the founders of Food Cycle, a programme which aims to educate South African children about healthy eating habits.

We know singing chef J Something as a laid-back whizz in the kitchen, full of encouragement, experiments and bright ideas. He’s a founding member of the award-winning band Mi Casa. He’s the founder of restaurant Something's Cooking By J Something (also the title of his bestselling cookbook) and has launched his own brand of gin, too. His cooking influences come from his Portuguese background, and his family have worked in the restaurant and hospitality industries his whole life.

The MKRSA contestants will be split into two tables of five teams each. They’ll be going head-to-head for that R1 million prize over the course of 13 episodes, with a grand finale in mid-December. We can’t wait to meet our 20 contestants, with M-Net introducing Table 1 in the second week of September.